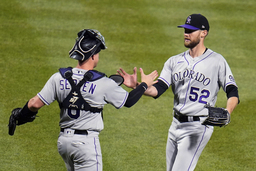 PITTSBURGH (AP) Connor Joe singled home the tiebreaking run in the top of the 10th inning and the Colorado Rockies slipped past the Pittsburgh Pirates 2-1 on Tuesday night.

With one out, Joe grounded his hit up the middle off David Bednar (1-1), scoring automatic runner Sam Hilliard from second base.

Joe ran his on-base streak to 21 games, and Jose Iglesias had two hits for the Rockies.

"It felt unbelievable," Joe said. "It wasn't pretty but a win's a win and we're really thankful for that. We'll try to build off that and build some momentum for the rest of the road trip."

The Pirates put runners on first and third with one out in the ninth, but Bard escaped the jam to keep it tied at 1. He got Cal Mitchell to hit into a fielder's choice against a five-man infield, with Rodolfo Castro thrown out at home. Michael Perez grounded out to end the inning.

"Daniel is the type of guy who can pitch through traffic," Rockies manager Bud Black said. "He's got outstanding stuff and he's having a great year."

"We need a win and (the offense) fought so hard to get those runs that I wanted them to stand up," Bard said.

The Rockies tied the game in the eighth on Ryan McMahon's line-drive single to center field with two outs. The run was unearned after Castro, the rookie shortstop, booted Elias Diaz's grounder for an error to start the inning.

Mitchell drove in the Pirates' lone run in his major league debut with a fifth-inning single. Fellow rookie Roansy Contreras pitched five shutout innings in his first big league start of the season.

Both were called up from Triple-A Indianapolis earlier in the day.

"Their kid has a great arm," Black said. "We couldn't solve him."

Mitchell's one-out single scored Diego Castillo, who had doubled. In the third, Mitchell made a leaping catch on Charlie Blackmon's long drive to right field.

"It was amazing," Mitchell said. "I couldn't ask for anything more. After I got the hit, I was able to exhale and then it felt like any other game."

Contreras gave up three hits in his second career start. He struck out five and walked two.

Contreras made three relief appearances with the Pirates earlier this season after debuting last September.

Rockies starter Kyle Freeland allowed one run and two hits in 4 1/3 innings while striking out six and walking two.

After making his warmup pitches prior to the third, Freeland doubled over behind the mound. He stayed in the game after being visited by Black and an athletic trainer.

It turned out Freeland, who has been battling a cold, was coughing after feeling something in his lungs.

"I gave it everything I had," Freeland said. "I just wanted to get us as deep into the ballgame as I could and then the bullpen did a great job after that."

The Pirates lost for the fourth time in five games and have scored three runs or fewer in 10 of their past 12.

Mitchell's prospect status seemed in doubt during the offseason when the Pirates did not protect him on their 40-man roster. Then he hit .307 with five home runs in 34 games for Indianapolis.

"I don't know if you want to call it a chip on your shoulder," Mitchell said of being left off the roster. "There's a sense of, `OK, now watch what I can do,' for sure."

Left-handed reliever Cam Alldred was designated for assignment to open a 40-man spot for Mitchell.

Rockies: LF Kris Bryant (back soreness) missed his second straight game and Black said the slugger could be placed on the injured list again. Bryant, signed to a $182 million, seven-year contract in March, was on the IL from April 26 to May 20 with back problems.

Pirates: DH Daniel Vogelbach (left hamstring strain) was placed on the 10-day IL and RHP Heath Hembree (right calf strain) was put on the 15-day IL. . Double-A Altoona C Henry Davis (non-displaced left wrist fracture), the first pick in last year's amateur draft, is expected to begin baseball activities by the end of the week after being out since May 13.

Rockies: RHP Ryan Feltner (0-1, 7.20 ERA) will be recalled from Triple-A Albuquerque to start Wednesday in the series finale. He made one start for Colorado earlier this season, giving up four runs over five innings in a loss at Philadelphia on April 27.