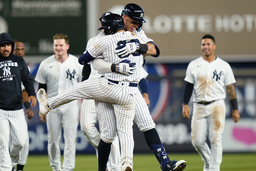 NEW YORK (AP) Jose Trevino stood next to his pinstriped teammates, hands on his head, and looked around at the celebration he'd just set off at Yankee Stadium.

Exactly the moment he and his father dreamed about together. Until Joe Trevino died in 2013.

Tears welled in Jose's eyes as the moment set in. This was the best birthday present he could have given his dad.

"It would have been awesome for him to be here," he said. "But I know he's watching."

Trevino hit a game-ending single in the 11th inning to rally the ailing New York Yankees past the Baltimore Orioles 7-6 on Tuesday night, ending a three-game skid and capping an emotional day that also included his second homer of the season and a tying single in the seventh.

Trevino began what would have been Joe Trevino's 69th birthday by sipping coffee out of his father's favorite mug. He ended it with a most unexpected moment for a player acquired just before opening day as a glove-first backup catcher.

Joe Trevino had lived this moment with his son over and over.

"My dad was a huge Yankees fan," Jose Trevino said. "He would always put me in these scenarios. He always said, 'Ninth inning, down one, you need a base hit here to tie the game or win the game at Yankee Stadium.'

"He always said, like, `I'm preparing you to be a Yankee, always,'" he added.

Trevino's solo homer in the third helped New York build a 3-0 lead, and his single in the seventh tied it at 5.

Austin Hays hit an RBI groundout in the top of the 11th off winner Clarke Schmidt (3-2), adding to his solo homer that helped the Orioles erase their early deficit and putting pressure on New York to score in the bottom of the inning.

Isiah Kiner-Falefa plated automatic runner Gleyber Torres - who homered twice - to tie it, spoiling Bryan Baker's bid for his first big league save. Marwin Gonzalez followed with another single, and Trevino then scorched the winning hit off Baker (1-2) into the left-field corner.

Trevino raised his arms as he rounded first, then was swarmed near second base by teammates. The first-year Yankee stepped out of the scrum and briefly soaked in the scene by himself.

"You get to wear pinstripes, you have fun with it and you take advantage of it," the 29-year-old said. "And even if you're wearing them, you don't get to wear them forever, so enjoy it while you have it."

A former Texas Ranger who grew up in Corpus Christi, Trevino began his postgame interview by directing sympathies to victims of a shooting Tuesday that killed 19 children in a Texas elementary school.

"My thoughts and prayers to everybody in Texas," he said.

Trevino had a similarly emotional moment in 2018, when he delivered a walk-off hit for the Rangers in his third major league game, which happened to come on Father's Day. Kiner-Falefa also scored the winning run in that game for Texas.

"That was a cool moment for him to really earn those pinstripes," Kiner-Falefa said. "It's incredible. It's something you can't explain."

Kiner-Falefa, Gonzalez and Trevino combined for six hits from the bottom three slots in the order, which helped the Yankees overcome injuries to DJ LeMahieu and Giancarlo Stanton. LeMahieu was scratched shortly before first pitch with left wrist discomfort, and Stanton was replaced by pinch-hitter Estevan Florial in the seventh due to right calf tightness.

LeMahieu had an MRI that came back clean. He received a cortisone shot but could be back within a day or two. Stanton will have an MRI on Wednesday.

The Yankees also added closer Aroldis Chapman to the injured list Tuesday, and sluggers Joey Gallo and Josh Donaldson remain on the COVID-19 IL. Gonzalez, who replaced LeMahieu at third, was hit by a pitch in the right hand in the seventh but stayed in the game.

New York starter Jordan Montgomery cruised into the seventh before allowing Hays' leadoff homer, which cut the Yankees' lead to 3-2. Montgomery was promptly replaced by Michael King, who gave up a go-ahead, three-run homer to ex-Yankee Rougned Odor.

Odor had four RBIs and extended his hitting streak to nine games for Baltimore, which had won four of five.

Yankees: Chapman was placed on the 15-day injured list with left Achilles tendinitis. ... LeMahieu was set to lead off and play third base, but New York announced he wouldn't play about 90 minutes before first pitch. ... New York activated C Kyle Higashioka from the COVID-19 IL. Gallo has tested negative and worked out at Yankee Stadium on Tuesday.

The Yankees are expected to give LHP JP Sears (1-0, 0.00) his first big league start Wednesday night. The 26-year-old has dominated Triple-A this season and pitched two scoreless innings in two relief appearances for the big club. Baltimore plans to start RHP Tyler Wells (1-3, 4.41).