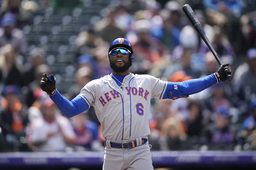 DENVER (AP) Starling Marte homered in his return to the lineup, and the New York Mets beat the Colorado Rockies 5-1 in the first game of a split doubleheader on Saturday.

Friday's game was postponed when wintry weather blew into Colorado after temperatures were in the high 80s on Thursday. Snow continued to fall Saturday morning but by first pitch the skies were clearing and the temperature was 45 degrees.

Carlos Carrasco (4-1) allowed a run on seven hits in 5 1/3 innings and Luis Guillorme had three hits for New York.

Marte was away from the team following the death of his grandmother and was reinstated from the bereavement list before the game. His first swing of the day went deep into the left field bleachers to give the Mets a 2-0 lead two batters into the game.

"We all just kind of looked at each other and went, `Really?' You can't make that stuff up," manager Buck Showalter said of the home run. "It was emotional. I'm glad I had glasses on."

When Marte crossed home plate he looked up and pointed to the sky.

"It's a hard situation because it's one of those things that's going to be in my mind for a very long time," Marte said of his grandmother's death before the game. "Being around the team is a distraction, but...you have to go through it."

Patrick Mazeika had a two-run double in the second inning to stretch New York's lead and Francisco Lindor's RBI single in the sixth made it 5-0.

Carrasco left after Brendan Rodgers singled in the sixth inning. Jose Iglesias hit a grounder in front of the plate and beat the throw to first, allowing Cron to score from third.

"This is my first time pitching here," Carrasco said. "Normally when I throw my changeup it's completely different. Here it looked like more like to two-seamer."

The Mets and pitcher Chris Bassitt agreed on a one-year, $8.8 million contract with a mutual option for a 2023. The agreement avoided an arbitration hearing that would have taken place Monday.

"I didn't want to go to trial," Bassitt said after the first game. "I like everyone here. I think we have a really great relationship here and just why even remotely try to mess with that. We have such a special group that I don't want to really be a distraction and hurt that in any way."

Despite injuries to the rotation Bassitt thinks the team has a chance to win.

"We have a real chance to win a World Series and that's all I've been thinking about, just what it kind of takes to put our team in the best spot to do that," he said.

New York third baseman Eduardo Escobar accrued 10 years of major league service and was celebrated by the team, which made a video to mark his milestone. The Mets gave him a bottle of champagne but he won't open it yet.

"I'll drink it once we become champions," he said before Saturday's first game.

Mets: Showalter said RHP Tylor Megill (right biceps tendinitis) is scheduled to throw back in New York and he will eventually have a rehab start. ... RHP Max Scherzer was placed on the 15-day injured list with a left oblique strain. The move is retroactive to Thursday.

Rockies: Activated OF Kris Bryant (back strain) from the injured list before the game. Bryant had not played since April 25 in Philadelphia. He singled in four at-bats in the first game.