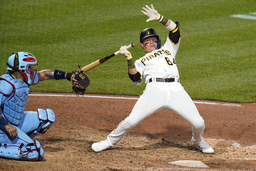 PITTSBURGH (AP) Paul Goldschmidt went 4 for 5 with two doubles and two RBIs to lead the St. Louis Cardinals over the Pittsburgh Pirates 5-4 on Saturday night.

Goldschmidt extended his hitting streak to 14 games and his on-base streak to 28. His two-run double capped a four-run second inning.

"Just tried to have some good at-bats," Goldschmidt said. "I found a few holes. I didn't really crush any of those balls. Some at-bats are good, and others aren't as good. Whether I'm going good or bad, I just try to focus on every day and trying to have the best at-bats I can."

Bryan Reynolds hit an inside-the-park home run for the Pirates, and Yoshi Tsutsugo had a two-run double. Both finished with two hits - Reynolds also doubled.

Highly touted St. Louis prospect Matthew Liberatore came within one out of winning his major league debut. The left-hander allowed four runs and seven hits in 4 2/3 innings while striking out three and walking two.

Liberatore was recalled from Triple-A Memphis before the game.

"Command wasn't great, but the nerves were alright," Liberatore said. "I felt pretty comfortable out there. At the end of the day, it's still the same game and that's how I tried to approach it. I just didn't get ahead on guys and that hurt me."

Drew VerHagen (1-0) tossed 2 1/3 scoreless inning in relief of Liberatore for his first major league win since 2019 with Detroit. VerHagen spent the past two seasons playing in Japan.

"It was just fun to pitch in a close game and get some important outs," VerHagen said.

Ryan Helsley worked a perfect ninth for his second save.

Tommy Edman added two hits as the Cardinals had a total of 10.

Jose Quintana (1-2) was tagged for five runs - two earned - and seven hits in 3 2/3 innings. He struck out four and walked one.

In his previous four starts, Quintana gave up a total of three runs in 23 innings.

The Cardinals broke a scoreless tie with the four-run second. A fielding error by third baseman Ke'Bryan Hayes let in the first run and Edmundo Sosa hit an RBI single before Goldschmidt lined his two-run double to right.

Tsutsugo's double to deep center in the bottom of the inning drew the Pirates to 4-2.

Edman singled in a run for the Cardinals in the fourth for the first of his two hits, but Liberatore was unable to make it through the fifth when Reynolds' inside-the-parker made it 5-4.

Reynolds hit a drive that hit off the fence in left field and then rolled into left-center as he scored standing up. It was Pirates' first inside-the-park homer since Starling Marte had one in 2018 at Milwaukee, and Pittsburgh's first at home since Pedro Alvarez in 2013.

"I might pitch a long time and never give up another inside-the-park home run," Liberatore said. "I wonder how many pitchers have done that in their debut?"

Pittsburgh lost for the fourth time in five games.

Liberatore was the first Cardinals pitcher to make his major league debut as a starter against the Pirates since Alan Benes in 1995 and the first lefty since Ray Sadecki in 1960.

The Cardinals optioned RHP Jake Walsh to Memphis to open space on the 26-man roster for Liberatore. RHP T.J. Zeuch was designated for assignment to clear a 40-man spot.

Sunday's finale of the three-game series will start at 11:35 a.m. to accommodate Peacock, NBC's streaming service. It will be the earliest game played in Pittsburgh since the Pirates hosted the Los Angeles Dodgers at 10:05 a.m. on July 4, 1987, at Three Rivers Stadium.

Cardinals: CF Harrison Bader was a late scratch because of lightheadedness but entered in the eighth inning as a defensive replacement. . OF Dylan Carlson, originally slated to play right field until moving to center, exited with left hamstring tightness after flying out to end the top of the third inning. He will be re-evaluated Sunday.

Pirates: SS Kevin Newman (left groin strain) has gone 2 for 8 with a double in the first three games of his rehab assignment with Triple-A Indianapolis.