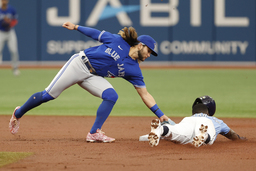 Bichette's first was a solo home run off right-hander Hunter Greene in the fourth, No. 50 of Bichette's career. He added a two-run blast off Luis Cessa (2-1) in the seventh. Both came on the first pitch in his sixth career multi-homer game.

"I never knew that 50 was a milestone," Bichette said. "I'm grateful to be able to be here and to have an opportunity to hit home runs in the major leagues."

All six of Bichette's home runs this season have tied the game or given the Blue Jays the lead.

Greene allowed one run and four hits in six innings, walking two and striking out six in his first start since tossing 7 1/3 hitless innings against Pittsburgh last Sunday.

Manoah (5-1) allowed one run and seven hits to snap a three-start winless streak and get his first W since April 28 against Boston. He walked none and struck out four.

"It's special to watch him do his job," Bichette said of Manoah.

Jordan Romano struck out the side in the ninth for his AL-leading 14th save in 16 chances, fanning fellow Canadian Joey Votto for the second out.

Starting at DH, Votto went 1 for 4 with a double in his second game since returning from a COVID-19.

"I don't think he's exactly where he wants to be but he's getting close," Reds manager David Bell said.

After retiring Tyler Naquin on a bunt attempt to end the eighth, Manoah held one finger aloft as he returned to the dugout, seemingly indicating that he wanted one more inning. Pitching coach Pete Walker spent time chatting with an animated Manoah while the Blue Jays batted, explaining manager Charlie Montoyo's decision to sit him after 83 pitches.

"We've got the best closer in baseball," Manoah said later. "It doesn't matter what my pitch count is, he's coming in."

The Reds opened the scoring on Votto's RBI double in the fourth, which came after a unique double play that nearly stopped Cincinnati's rally before it started.

TJ Friedl singled to open the inning and advanced to third on Tyler Naquin's double. Tommy Pham broke his bat on the first pitch he saw from Manoah, sending a liner back to the mound. Manoah evaded a jagged piece of broken bat and made the catch, then quickly threw to third to double up Friedl.

After getting 22 outs without giving up a hit against the Pirates, Greene retired the first batters he faced Saturday before issuing a two-out walk to Alejandro Kirk in the second. Matt Chapman stuck out to end the inning.

Greene retired the side on four pitches in the third, but his no-hit streak ended when Bichette connected on the first pitch of the fourth.

Greene ended his outing by fanning Chapman again to leave the bases loaded in the sixth.

"Out of everything that Hunter has done this year, that might be my favorite moment so far," Bell said.

Cincinnati's Tyler Stephenson doubled to begin the seventh and moved to third on Mike Moustakas' grounder, but Manoah fanned Colin Moran before second baseman Santiago Espinal made a diving stop on Alejo Lopez's grounder to end the inning.

GREENE ON THE GUN

Greene said he was excited to take the mound in Toronto on his first trip to Canada's biggest city.

"I've always wanted to pitch here in this environment, here at this stadium," he said. "To be able to do well was really, really nice, and it was special."

One thing Greene wanted while north of the border was a photo of himself pitching with the CN Tower in the background. He got his wish when the roof opened before the top of the fourth, allowing a Reds staffer to get the shot.

Friedl crashed into the center field wall after making a running catch on George Springer's deep liner in the bottom of the first.

Reds: SS Kyle Farmer was held out of the starting lineup (rest).

Blue Jays: Lourdes Gurriel Jr. returned to the lineup at 1B. Gurriel left Wednesday's game against Seattle because of a sore left hamstring. . Vladimir Guerrero Jr. started at DH.

The Reds scratched RHP Connor Overton (back) from Sunday's scheduled start and will instead turn to RHP Graham Ashcraft to make his major league debut against Blue Jays LHP Yusei Kikuchi (2-1, 3.38). Kikuchi is 2-0 with a 1.56 ERA in his past three starts.