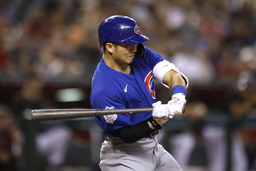 PHOENIX (AP) Yan Gomes' cameo as a middle-of-the-order masher was a success for the Chicago Cubs.

The veteran catcher batted cleanup for just the 14th time in his 11-year career, responding with a solo homer in the fourth inning and a go-ahead single in the ninth to lift the Cubs over the Arizona Diamondbacks 4-2 on Saturday night.

"I put him up there at the top of the order because he's got such a quality at-bat," Cubs manager David Ross said. "It doesn't matter who we're facing. It doesn't matter - righty, lefty. It's a really good approach."

The Cubs have won three out of their past five, which is welcome good news for the franchise after dropping eight of nine.

The game was tied at 1 until the Cubs sent eight to the plate in the decisive ninth. Willson Contreras walked, Seiya Suzuki singled and Ian Happ walked to load the bases with no outs. That brought up Gomes, who lined a single to center to make it 2-1. Rafael Ortega added a bases-loaded walk and Jason Heyward had an RBI groundout to push the advantage to 4-1.

Rowan Wick worked the ninth and gave up one run before earning his third save. Mychal Givens (3-0) threw two-thirds of an inning of scoreless relief.

The D-backs had the tying run on first base in the ninth, but Wick retired Cooper Hummel on a swinging strikeout for the final out.

Chicago right-hander Kyle Hendricks gave up one run over 5 2/3 innings. He gave up five hits, walked two and struck out two.

"It was a little bit of a battle," Hendricks said. "But having Yan, he stuck with me. Stuck with the fastball down and away, he kept telling me to get a good angle, stay on top. About the third or fourth inning, it started clicking and coming together."

It was another tough outing for D-backs reliever Mark Melancon (0-5), who didn't record an out and let the first four Cubs batters of the ninth reach base. Arizona signed the veteran to a $14 million, two-year during the offseason with the hope he'd add some stability to the back end of the bullpen, which was a huge problem last season.

Melancon has had a particularly tough time entering games that are not save situations.

"The bottom line is he's got to execute at a higher level no matter what," D-backs manager Torey Lovullo said. "If it's a tie game or not, he's got to command the cutter."

The D-backs took a 1-0 lead in the second on a run-scoring single by Nick Ahmed that brought home Ketel Marte.

Gomes got the Cubs on the scoreboard with a solo homer in the fourth, driving a fastball 402 feet into the left-center seats to tie it at 1. It was the catcher's second homer of the season.

It was the only blemish for D-backs right-hander Zac Gallen, who threw six stellar innings. He struck out nine, gave up two hits and walked one. It's the latest in a string of good performances for Gallen, who has a 1.05 ERA through six starts.

Gallen's looked much more like he did back in 2020, when he was one of the National League's best pitchers in the abbreviated season and finished ninth in the NL Cy Young voting. Like many of the D-backs, he struggled in 2021, finishing with a 4-10 record and 4.30 ERA.

Cubs: Suzuki (right ankle) was back in the starting lineup for the first time since Monday.

The Cubs will start LHP Justin Steele (1-4, 5.32 ERA) against Diamondbacks RHP Humberto Castellanos (2-1, 4.32) in the finale of the three-game series on Sunday.