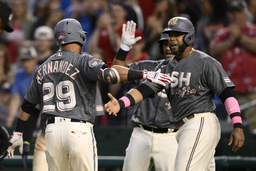 Manager Dusty Baker and the Astros fell one game short of matching the franchise-record 12-game winning string achieved in 1999, 2004 and 2018.

"We weren't gonna win every game," Baker said. "I would love to, but it was their night. We just have to brush that one off and start a new streak tomorrow."

The Houston staff fashioned a 0.91 ERA during this recent run, but Nelson Cruz and the Nationals collected 14 hits and five walks against five pitchers. Starter Cristian Javier (2-1) was tagged for seven runs and eight hits over 3 2/3 innings - the Astros had allowed a total of four runs over their past five games.

"Yesterday it was a tough (6-1 loss) for us and they were able to get the better of us, but today all of us did a great job of making adjustments and going out there and being aggressive," Hernandez said through an interpreter.

Jose Siri had a homer, triple and a single for Houston. Yuli Gurriel also had three hits

Cruz had a three-run double, two singles and a walk for the Nationals - who improved to 5-14 at home. Juan Soto doubled, walked twice and scored three runs.

"When you've got guys like Cruz and Hernandez, they're a dangerous crew over there and they got the big hits when they needed them," Baker said. "I think their first seven runs were with two outs and that usually gets it done."

Josh Rogers (2-2) worked one inning for the win. Washington starter Erick Fedde was lifted after Siri's leadoff homer in the fifth made it 7-3.

Hernandez hit an RBI single in the first and added a three-run homer into the Nationals bullpen in the third for a 4-0 lead.

Houston got two back in the fourth, but the Nationals loaded the bases in the bottom half with two bunt singles and a one-out walk to Soto. Josh Bell popped out, but the right-handed hitting Cruz lined a full-count fastball from Javier off the base of the wall in right center to clear the bases.

"I hit it pretty good," Cruz said. "That pitch was a little bit off the plate also, so to be able to stay on it and hit it that hard is a good sign."

The Washington slugger has hit safely in seven-of-his-past eight games to raise his average to .200.

Franco hit a two-runner homer in the fifth and added an RBI double as part of a four-run sixth.

Astros: 2B Jose Altuve, lifted for a defensive replacement in the ninth inning Friday for precautionary reasons after he slipped on the grass earlier in the game, was given a planned day off. . SS Jeremy Pena missed his second game since leaving a game Thursday at Minnesota with a knee injury. Baker said Altuve and Pena will play on Sunday.

The Astros acquired infielder/outfielder Mauricio Dubon from the Giants on Saturday in exchange for minor league catcher Michael Papierski. Dubon, 27, hit .239 with two home runs in 21 games for the Giants. He's expected to join the Astros on Sunday.

AND SOTO IT GOES

Astros: RHP Justin Verlander (4-1. 1.55 ERA) pitched eight shutout innings and allowed one hit in his last start, Tuesday against the Twins. He's 2-0 with a 2.57 ERA in two career starts against the Nationals.

Nationals: LHP Patrick Corbin (0-5, 6.06) faces the Astros for the first time since Game 7 of the 2019 World Series when he pitched three innings of scoreless relief.