Harper, Phillies continue to roll with 8-3 win over Dodgers 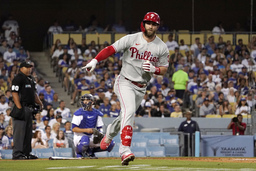 The two-time NL MVP made his major league debut here in 2012 and he also likes it because he gets to see family and friends that make the drive over from Las Vegas.

During the first three games of a weekend series, the Philadelphia Phillies slugger has given family members and the Los Angeles Dodgers pitching staff a run they won't soon forget.

Harper homered for the third straight game Saturday night and finished with three hits in an 8-3 victory. It was part of a barrage in which the Phillies went deep four times and got to .500 (17-17) for the first time since April 13.

"He's in a great spot. He's so important to our offense. We've got other guys in good spots too, which is really helping out," Phillies manager Joe Girardi said.

Harper also had a double, making him the first visiting player in the 60-year history of Dodger Stadium to have a homer and at least two extra-base hits in three straight games.

"I think we've done a great job of coming in here, getting on guys early and battling the best we can and jumping on stuff when we can," said Harper, who is 8 for 12 with three home runs and eight RBIs in the series.

Jean Segura, Kyle Schwarber and Rhys Hoskins also hit home runs off Dodgers starter Julio Urias (2-3). Philadelphia - which has has won four straight and five of its last six - looks for its first four-game sweep at Chavez Ravine since 1985 on Sunday.

One of the few saving graces for the Dodgers is that they won't see Harper in the series finale. Harper is scheduled to receive a platelet-rich plasma injection to help with a partially torn ligament in his right elbow.

Harper will remain the designated hitter since he won't throw for a month.

"It has been nice to get some clarity. It's been huge for me. I know where it stands right now and obviously go with that," Harper said.

Harper hit a three-run shot to right field off Urias to extend the Phillies' lead to 6-1 in the third inning. It is the eighth time in Harper's career he has homered in at least three straight games and the first since August 2019.

Ranger Suarez (4-1) went a season-high seven innings and won for the third time in his last four starts.

Mookie Betts hit a solo shot for Los Angeles, who have dropped four straight for the first time since last June.

"The last four games we haven't executed like we are capable of doing," manager Dave Roberts said. "When you take a team that those guys who are swinging hot bats and you don't make good pitches, they are going to make you pay."

Segura extended his hitting streak to 11 games in the first inning with a three-run homer that barely got over the short fence in the left-field corner. The Dodgers had a chance to get out of the inning, but third baseman Justin Turner had a throwing error on a grounder hit by Nick Castellanos, which brought Segura up next.

Schwarber and Hoskins added solo shots in the fourth to extend the lead to 8-1.

The Dodgers responded in the bottom of the fourth on a two-run double down the right-field line by Cody Bellinger with the bases loaded.

Suarez threw 102 pitches, the second straight outing he has gone over the century mark. The left-hander - who retired the last 11 hitters he faced - allowed three runs on five hits and struck out six.

Urias gave up a career-high four home runs, surpassing the three he allowed in a start during his rookie season in 2016. Five of the eight runs allowed by the left-hander were earned on eight hits with three strikeouts in six innings.

Betts' home run was the 31st he has had leading off in his career, including 11 with the Dodgers.

Phillies: Girardi said SS/2B Bryson Stott wasn't in the lineup because left-handed hitters have struggled against Urias this season.

Dodgers: RHP Blake Treinen (right shoulder inflammation) said he is still feeling discomfort and doesn't have a timetable on when he will be able to pick up a baseball to resume throwing.

The Phillies announced before the game that former pitcher David West, who was part of their 1993 World Series team, died of brain cancer. He was 57.

West had a 10-year career in the majors with the New York Mets, Minnesota Twins, Philadelphia Phillies and Boston Red Sox. He pitched for the Phillies from 1993-96.

Phillies RHP Aaron Nola (1-4, 3.83 ERA) hasn't had a win since his first start of the season. RHP Michael Grove will make his big-league debut for the Dodgers.