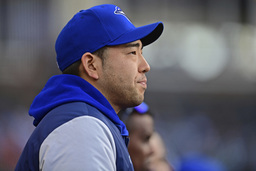 The Blue Jays won the opener 8-3 as George Springer and Raimel Tapia each drove in three runs in the first four innings against ace Shane Bieber.

In the second game, Miller's double was part of a three-run first. Reyes hit a solo shot in the third and singled home Amed Rosario in the fifth. The Guardians played their MLB-high third doubleheader, all at Progressive Field.

"Every time I do something special for the team, the guys let me know they're happy for me," Reyes said. "It's fun seeing the way we score really quick. A lot of teams panic right away when we do that."

Triston McKenzie (2-2) earned his second straight victory with six innings of two-run ball, striking out nine. Cleveland has won six of eight since falling a season-low five games below .500 on April 28.

Bo Bichette had an RBI double in the first and Santiago Espinal doubled home a run in the second for Toronto, which had its final 20 hitters retired in order by McKenzie and a trio of relievers. Ross Stripling (0-1) gave up four runs in four innings.

"They have a lot of good hitters, so you're really locked in," McKenzie said. "Especially when you know the team needs a win after losing the first game. I wanted to bring some energy to the guys."

In the opener, Blue Jays starter Kevin Gausman (3-1) allowed one run and struck out five over 6 1/3 innings. The right-hander issued his first walk of the season against his 137th batter, Reyes in the fourth, after 35 1/3 innings without a free pass.

"The guys did a really good job against a really good pitcher in Bieber," Gausman said. "That was really the difference-maker. We have such a potent lineup. You're always just one or two swings away from changing the game."

Bieber (1-2) surrendered a career-high tying seven runs in 3 1/3 innings. The 2020 AL Cy Young winner did not have a strikeout for the first time in 86 career starts and 88 total appearances.

"It was just lack of command, lack of getting ahead, which led to lack of conviction," Bieber said. "Overall, just pretty frustrating because I didn't give the team a great chance to win. All in all, my body feels good. It was just a tough one today."

The Blue Jays are 1-2 on a nine-game, 11-day road trip that continues against the Yankees and Rays.

"At least we had a day off yesterday, so that helped," Toronto manager Charlie Montoyo said.

Cleveland has had four home games postponed due to inclement weather, including Friday against Toronto.

Blue Jays OF Teoscar Hernandez (left oblique strain) was added to the roster as the 27th man for the doubleheader and went 0 for 3 in the second game. The two-time Silver Slugger recipient had been on the injured list since April 14.

Hernandez hit .455 with two homers and four RBIs in a three-game rehabilitation assignment with Class A Dunedin that wrapped up Thursday.

"A week ago, my body felt tight, which is why I asked for the extra day before coming back," he said. "I wanted to feel 100 percent and I wanted to take more at-bats."

Blue Jays: LHP Ryan Borucki (left middle finger blister) was reinstated from the 10-day IL between games and pitched one inning. RHP Julian Merryweather was optioned to Triple-A Buffalo after retiring all six batters he faced in the opener.

Guardians: 1B Yu Chang (COVID-19 recovery) is hitting .200 through four games of a rehab assignment split between Triple-A Columbus and Double-A Akron. Chang was placed on the IL before Cleveland's home opener on April 15.

Guardians: LHP Konnor Pilkington (0-0, 0.00 ERA) will be recalled from Triple-A Columbus. The rookie has tossed five scoreless innings in three games for Cleveland.