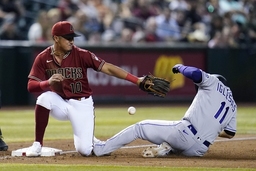 Colorado trailed 1-0 entering the ninth and pieced together four runs off Arizona closer Mark Melancon (0-3), who had a 1.08 ERA coming into the game. C.J. Cron and Ryan McMahon led off the inning with singles but Melancon retired the next two batters, bringing up Daza, who entered the game as a pinch-hitter in the seventh.

Daza lined a ball up the middle to tie the game and Iglesias followed with a go-ahead single that was just out of the reach of Arizona third baseman Josh Rojas. Joe capped the rally with a single up the middle that sent home two runs - including one that scored because of an Arizona throwing error - for a 4-1 lead.

"It's the best feeling ever, for real," Daza said. "You go out there, compete and do the best for the team."

Jordan Luplow stole back-to-back bases in the eighth to help the D-backs take a brief 1-0 lead.

The 28-year-old Luplow has good speed but isn't necessarily known as a huge stolen base threat with just seven swiped bags over his six years in the big leagues. He walked with one out and then stole second. On the very next pitch, he made a surprising dash for third, sliding in safely when Ryan McMahon missed on his tag.

Ketel Marte followed with a walk and then Christian Walker drove his run-scoring double off the right-field wall, just out of the reach of Colorado's Charlie Blackmon.

But the Diamondbacks couldn't hold the lead and their four-game winning streak was snapped. Melancon gave up a career-high five hits in the ninth - all of them singles.

"We grind through the day, put ourselves in position to win the game," D-backs manager Torey Lovullo said. "We just didn't execute well enough in the ninth inning. You're one out away with your closer on the mound - I'll take those odds."

Colorado's Daniel Bard worked the ninth for his ninth save in 10 chances this season, working around a leadoff walk.

"We made our breaks," Rockies manager Bud Black said. "That's part of being able to win a game like this."

The game stayed scoreless through seven innings thanks to great pitching performances from Arizona's Zach Davies and Colorado's Kyle Freeland.

The right-handed Davies threw 6 1/3 innings of shutout ball, giving up three hits and two walks while striking out six.

Freeland countered with six scoreless frames, giving up give five hits and two walks while striking out five. The lefty got out of a two-out, bases loaded jam in the sixth when Nick Ahmed hit a grounder back to the pitcher.

"Good pitching matchup," Freeland said. "Myself and Davies were going back and forth matching one another. But in the end, we were able to string together some hits and put some runs on the board."

Rockies: Manager Bud Black told reporters that star OF Kris Bryant (back) will remain in Arizona to rehab while the Rockies continue their road trip in San Francisco early next week. The Rockies have their spring training facility in nearby Scottsdale.