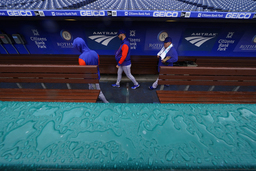 By BY KEVIN COONEY

PHILADELPHIA (AP) For the second straight day, the game between the New York Mets and Philadelphia Phillies was postponed due to rain. Saturday's game will be made up as part of a single-admission doubleheader on Sunday.

The first game will start at 12:35 p.m., with the second game following immediately afterward. The game that was postponed Friday night was rescheduled for Aug. 20 as part of a split-admission doubleheader.

The teams had hoped to get Saturday's game in despite a forecast of consistent rain throughout the day to avoid a scheduling backlog. Philadelphia is leaving Sunday for a seven-game West Coast trip to Seattle and Los Angeles and tried to avoid a doubleheader but couldn't as rain continued to fall on the already saturated grass. The game was called off less than two hours before the scheduled first pitch.

Both teams made roster moves before Saturday's announcement.

The Phillies placed shortstop Didi Gregorius on the 10-day injured list with a left knee strain that manager Joe Girardi said occurred during a collision with left fielder Kyle Schwarber on Wednesday night against Texas. Infield prospect Bryson Stott was called up from Triple-A Lehigh Valley to take Gregorius' spot on the roster.

Meanwhile, the Mets announced that they claimed infielder Gosuke Katoh off waivers from the Toronto Blue Jays. The 27-year-old made his major league debut for Toronto on April 9, going 1 for 7 in limited action. Katoh was optioned to Triple-A Syracuse.