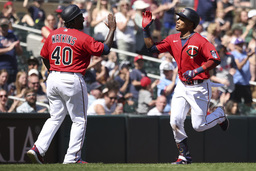 MINNEAPOLIS (AP) Byron Buxton has been a key part of the Minnesota Twins' early-season success, which ran to 13 wins in 16 games on Saturday afternoon with a 1-0 win against the Oakland Athletics.

Minnesota hopes Buxton will be available to help keep the run going.

The Twins beat Oakland on a solo homer by Jorge Polanco with four pitchers combining for the shutout, but the oft-injured Buxton left the game in the eighth inning with right hip tightness.

"I don't know the level of concern," said Minnesota bench coach Jayce Tingler, who is acting manager while Rocco Baldelli is out with COVID-19. "As you guys know, he's been battling a little bit. But certainly the hand, the knee and the hip, all three things of those. ... Hopefully, we get some good treatment and just kind of see where we're at from there."

Buxton reached first base in the first inning following a strikeout and wild pitch. The speedy outfielder lunged for first base to reach safely and hurt his hip. Tingler said the hip tightened on Buxton, who is tied for the major league lead with nine home runs this season, and eventually he had to be replaced.

Minnesota's pitchers were an otherwise bright spot, combining to strike out 15 while allowing just three hits.

Griffin Jax (2-0) earned the win with 1 2/3 innings in relief. Jhoan Duran struck out five in two innings for his second save, but the electric right-hander escaped after walking and hitting a batter in the ninth.

Oakland has lost eight in a row.

"It's part of this grind that we're in," Athletics manager Mark Kotsay said. "There in the ninth, again, we got guys on base. These guys are continuing to fight. We're in a tough stretch and we got to continue to stay together as a group, and just get through this, find a way to win a baseball game."

Sonny Gray returned from the injured list to make the start for the Twins after recovering from a hamstring strain. Gray pitched four innings, giving up two hits and two walks with seven strikeouts.

"I was kind of feeling a little bit better, and a little bit better," Gray said. "I thought maybe they'll let me go to the fifth, maybe they'll let me. I felt like I could have, but I also understood. I started feeling better, which is good, but then Danny came in and Griffin came in and then Duran came in. They're throwing the ball great. Shutouts are always fun. Shutouts are fun, especially when you're on the winning side of them."

Gray, who was originally scheduled to make a second rehab start on Saturday, only allowed two singles and five of his seven strikeouts were called. At one point, he struck out four of five hitters looking.

James Kaprielian (0-2) surrendered one run on three hits and two walks in 5 2/3 innings. He struck out seven, recovering from a tough first start to the season when he gave up four runs in two innings against Cleveland. The right-hander said he made an in-game adjustment Saturday moving his hands up.

"Just kind of felt more comfortable timing-wise, more on top of the baseball, quicker to the plate and then stuff started to play up a little bit because of it," Kaprielian said. "But I just think getting my feet under me a little bit and getting my comfort level back."

Kaprielian, who was making his second start of the season after recovering from an inflamed right AC joint, retired seven of eight before Polanco's two-out homer in the sixth on his final pitch.

Polanco's third homer of the season was a towering shot to the suites above the batter's eye in center field and traveled an estimated 451 feet. Polanco had three of Minnesota's five hits.

Kotsay said OF Ramon Laureano was traveling to Minnesota on Saturday to join the team. Laureano is eligible to return Sunday from his 80-game suspension for testing positive for a banned drug in 2021.

Athletics: Kotsay said OF Stephen Piscotty will be going on the injured list after an MRI showed a Grade 1 calf strain. He was replaced after running the bases in the second inning on Friday.

Twins: OF Trevor Larnach was scratched from the lineup before the game with lower-body tightness. . SS Carlos Correa was out of the lineup for a second straight game as he deals with a bruised finger from being hit in the hand by a pitch. Correa is considered day to day.

After having his start pushed back a day, RHP Chris Paddack (1-2, 3.15 ERA) is scheduled to pitch for Minnesota, with Oakland countering with RHP Daulton Jefferies (1-4, 4.81). Paddack earned his first win for the Twins in his last start with one run allowed in 5 1/3 innings at Baltimore. Jefferies has received one run of support or fewer in each of his five starts this season, losing the past four. He gave up six earned runs in five innings against Tampa Bay in his last start.