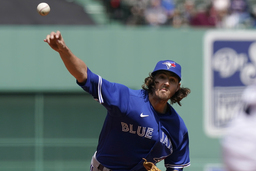 TORONTO (AP) Santiago Espinal drove in the go-ahead run with an RBI single in the seventh inning, Bo Bichette added a two-run homer and the Toronto Blue Jays beat the Houston Astros 3-2 on Sunday.

Right-hander Kevin Gausman (2-1) struck out a season-high 10 over seven innings to win his second straight decision as Toronto took two of three from Houston. The Blue Jays have won nine of 12.

Toronto won four of six in the season series against the Astros, the defending AL champions. Five of the six were decided by one run.

"Obviously this is not the end goal for us, but I think it's a good measuring stick," Bichette said.

Houston's Alex Bregman said he enjoyed the charged atmosphere in Toronto this weekend.

"I wouldn't be surprised if we play each other down the road," Bregman added. "I think both teams are really good."

Gausman allowed two runs and six hits. He has not walked a batter in 31 2/3 innings this season.

"His split, we couldn't pick it up," Astros manager Dusty Baker said.

According to MLB Stats on Twitter, Gausman is the first pitcher since Cy Young in 1906 to not walk a batter or allow a home run in five straight starts to begin a season (minimum 20 innings pitched).

"Obviously it's cool, but I've got another start in five days,' Gausman said.

Tim Mayza worked the eighth and Jordan Romano pitched around Kyle Tucker's one-out double in the ninth to earn his 11th save in 12 chances.

Romano got some help from right fielder George Springer, who made a sensational catch on pinch-hitter Bregman's liner for the second out.

"I just squared a ball up to the wrong guy," Bregman said after being denied by his former teammate. "I've seen him make that great catch so many times. He's fearless. He plays so hard all the time. He's an unbelievable player and he made a game-saving play."

Toronto, which won 2-1 Saturday, is 9-2 in one-run games. The Blue Jays lead the major leagues in one-run victories.

Astros left-hander Framber Valdez (1-2) didn't allow a hit until Bichette connected with two outs in the sixth, overturning a 1-0 deficit.

"Framber was great," Baker said. "He was excellent. I thought we took him as far as we could take him."

With one out in the sixth, Blue Jays outfielder Bradley Zimmer was hit by a pitch. Springer grounded into a fielder's choice, and Bichette followed with an opposite field homer, his third.

The Blue Jays lead the majors with 31 home runs.

The Astros tied it in the seventh when Tucker singled, stole second, and scored on Niko Goodrum's double. Tucker finished 3 for 4 and stole two bases.

The Astros became the latest team to depart Canada by bus, choosing to drive approximately two hours to Buffalo, New York, and fly home from there. By doing so, the Astros avoided having to test their travel party for COVID-19 before flying into the United States. The Boston Red Sox and the NBA"s Philadelphia 76ers both did the same leaving Toronto last week, as did the Blue Jays on their most recent road trip.

Before the game, Houston 1B Yuli Gurriel exchanged lineup cards with his sibling, Toronto OF Lourdes, who wrapped his big brother in a hug before heading back to his dugout.

Toronto failed to record at least five hits for the first time in 28 games, ending the longest active streak in MLB. The Blue Jays had three hits Sunday.

Following the game, Toronto optioned RHP Bowden Francis and INF Gosuke Katoh to Triple-A Buffalo, bringing their roster down to 26.

Astros: OF Michael Brantley returned as the designated hitter after missing the first two games of the series due to what the Astros called health and safety protocols. Brantley went 0 for 4.

Blue Jays: OF Teoscar Hernandez (strained left oblique) will begin a rehab assignment with Class-A Dunedin Tuesday. Hernandez has missed the past 17 games.