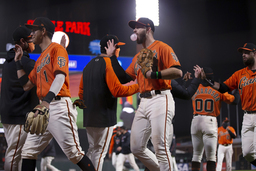 Slater led off the inning with an opposite-field drive to right against right-hander Keone Kela (2-2). Slater scored three runs despite entering the game in a 3-for-25 slide, including 11 straight hitless at-bats before the homer.

"I still feel like there's a lot of work to be done," Slater said. "Luckily it worked out tonight."

Buster Posey hit a two-run homer and Evan Longoria had a two-run single for the Giants, who improved to 11-3 at Oracle Park this season.

San Francisco moved 1 1/2 games ahead of San Diego for the NL West lead as they celebrated Hall of Famer Willie Mays a day after his 90th birthday.

Camilo Doval (1-1) pitched a scoreless seventh for his first major league win, and Jake McGee closed out his eighth save in nine chances with three strikeouts in the ninth. The Giants were particularly encouraged by the performance of Doval, who had allowed three homers in 6 2/3 innings entering the game.

"It was a great bounce-back outing for him," Giants manager Gabe Kapler said. "I continue to think he has really good composure."

The Giants jumped ahead 4-0 on Posey's homer in the third inning off starter Blake Snell and Longoria's two-run hit in the fifth off right-hander Austin Adams. Posey's opposite-field drive to right was his eighth homer of the year, already exceeding his 2019 total of seven. The six-time All-Star sat out last season due to family concerns caused by the pandemic.

Snell lasted 4 2/3 innings and was charged with four runs.

San Diego pulled even in the sixth. Giants starter Anthony DeSclafani entered the inning with a one-hitter, but that evaporated as Trent Grisham belted a two-run homer. Eric Hosmer also clobbered a two-run homer off Sam Selman.

Barry Bonds, baseball's all-time home run leader and Mays' godson, not only taped a video but also was shown next to the "Say Hey Kid" in his suite as public-address announcer Renel Brooks-Moon led fans in singing "Happy Birthday" before the top of the fourth inning. Mays received a cake shaped like a fielder's glove with a frosting-covered "ball" in the pocket.

Said Posey before the game, "When you think of the name `Willie Mays,' it's almost a mythological type of name. It has the same feeling as a Babe Ruth or Lou Gehrig."

Giants: OF Mike Yastrzemski left the 10-day injured list and OF Alex Dickerson went on it. Dickerson was shelved with a right shoulder bruise which he sustained Wednesday at Colorado. Yastrzemski, who missed the Giants' previous 10 games with a mild left oblique strain, didn't start Friday but is expected to rejoin the lineup Saturday, Kapler said. The Giants also reinstated left-hander Jarlin Garcia, who had been nursing a strained left groin, from the 10-day injured list.

Padres: Manager Jayce Tingler said that catcher Austin Nola sustained a bruise on his left hand when he was hit by a pitch from Giants reliever Zack Littell in the sixth inning, which forced him to leave the game. Tingler said X-rays were negative and that Nola could return to action as soon as Saturday. ... Tingler said that LHP Ryan Weathers threw a light bullpen Friday and RHP Dinelson Lamet will throw a light bullpen Saturday. The Padres have not announced a starter for Sunday but it could be either Lamet or Weathers. Both pitched in a 2-1 loss to Pittsburgh on Tuesday night. Lamet, who had been on the injured list with right forearm inflammation, started and went two innings and Weathers, who came out of his previous outing with a sore left arm, went three innings.