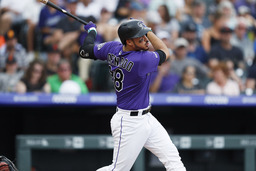 DENVER (AP) The work Kyle Freeland and Nolan Arenado put in off the field helped the Colorado Rockies win a series for just the second time in six weeks.

Freeland earned his first win in nearly four months and Arenado homered twice to lead the Rockies past San Francisco 6-2 Sunday in the final game at Coors Field for Giants manager Bruce Bochy.

Trevor Story homered for the fifth straight game against San Francisco. It's tied for the longest home run streak against an opponent in Rockies history.

Donovan Solano homered twice for the Giants, the first to lead off the game and again in the third inning off Freeland (3-9). He nearly had a third when he drove a ball to the wall in right in the fifth inning that was caught.

That was all the offense the Giants could muster against Freeland and four relievers.

"We had a hard time getting momentum going. Two solo home runs, you're not getting a lot of action here," Bochy said. "Sure you're getting on the board but I'm just talking about getting runners on."

Freeland, who was 17-7 with a 2.85 ERA last year, hadn't won since beating Philadelphia on April 18. He was 0-6 with five no-decisions and spent five weeks in Triple-A before returning July 13, and entered this game with a 7.48 ERA in 16 starts.

He worked extra in his bullpen sessions between starts to help correct mechanical issues and it paid off Sunday.

"It's a work in progress," Freeland said. "It's really the entire season of finding out what's wrong, fixing it, sticking with it and making sure it feels right to me and doesn't feel foreign to me."

Arenado has put in overtime in the batting cage to get his rhythm back. The All-Star third baseman hit .247 with two home runs in July but has four hits in his last two games.

"I was happy to feel good again and to drive the ball out of the ballpark a couple of times," Arenado said. "It feels like a while since I've done that."

Story gave Colorado a 2-1 lead with his 25th home run in the first and Arenado added a solo homer later in the inning off Tyler Beede (3-6).

"My changeup felt good but it wasn't moving," Beede said. "I hung some sliders - backed them up and they made me pay."

Arenado's second home run and 24th of the season leading off the fifth against reliever Andrew Suarez gave Colorado a four-run lead.

Giants: 3B Evan Longoria (left plantar fasciitis) was activated from the 10-day injured list and was in the starting lineup. He had a single in four at-bats. INF Zach Green was optioned to Triple-A Sacramento.

Bochy's 214 games as manager at Coors Field are double of any opposing manager. He finished 96-118 between San Diego and the Giants.

Bochy talked about his memories managing at the park, including a forgettable one in 1995 when he was with the Padres.

"Bip Roberts was safe at home and they called him out, I ran out to argue and I ran into (bench coach) Rob Picciolo's leg and I face planted right on the dirt," Bochy said. "The next day (Rockies outfielder) Larry Walker had this white chalk where my body was. That was probably my most embarrassing moment."

In addition to tying a club record, Story joined Mike Schmidt (1979) and Rogers Hornsby (1922) as the only players to homer in five straight games against the Giants franchise.

"Really good ballplayers," Story said. "It's cool to be beside them in that aspect."

Rockies: RHP German Marquez (10-5, 4.68) takes the mound Tuesday at Houston to face RHP Zack Greinke. In his last start, Marquez tossed six shutout innings against the Dodgers on Wednesday before leaving because of full-body cramping.