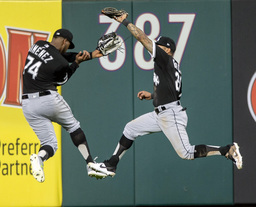 Nola pitched seven strong innings, Pivetta recorded the final six outs for his first career save and the Phillies beat the White Sox 3-2 on Saturday night.

Bryce Harper and Rhys Hoskins homered for Philadelphia, which ran out of pitchers and was forced to use outfielder Roman Quinn for two innings on the mound in Friday's 4-3 loss in 15 innings.

Nola and Pivetta made sure that wouldn't happen again on Saturday.

Nola (10-2) allowed one run and three hits with 10 strikeouts and two walks. He lowered his ERA to 1.91 over his last nine starts while reaching double digits in strikeouts for the 12th time in his career, including the fourth this season.

"I don't think he could've pitched any better or looked any stronger," Kapler said.

After going down in order in the eighth, the White Sox got the first two runners on in the ninth before Pivetta struck out Eloy Jimenez and Tim Anderson. Yolmer Sanchez's two-out single to right drove in Jose Abreu, putting runners on first and third. However, Pivetta struck out pinch-hitter Adam Engel to finish his 42-pitch outing.

"Can't say enough about Pivetta," Hoskins said. "We're set up nicely now (on Sunday) to win the series and hats off to (Nola and Pivetta) for picking us up."

Cesar Hernandez also had an RBI for the Phillies, who entered Saturday a game back in the NL wild-card race.

Jon Jay had an RBI double for Chicago, which dropped its ninth in the last 11. The White Sox are batting .194 while averaging two runs per game over that stretch.

Nola retired the first nine batters before walking Leury Garcia to start the fourth. Garcia scored on Jay's two-out double to right-center that put the White Sox up 1-0.

"I felt really strong," Nola said. "I was getting ahead, trying to pound the zone."

Harper got the first hit off Ross Detwiler (1-2) with a drive to the second deck in right field with one out in the fourth. Hoskins followed by drilling the next pitch, a 91-mph fastball, over the wall in center field for his 24th of the season to give Philadelphia a 2-1 lead. Both homers were measured at 406 feet.

"I made two bad pitches and paid for them both," Detwiler said.

The hits were redemption of sorts for Harper and Hoskins, who were a combined 1 for 11 with three strikeouts in the Phillies' 4-3 loss in 15 innings to the White Sox on Friday night.

Detwiler, making his fourth start, didn't allow another run after Hoskins' homer. He lasted 5 2/3 innings and gave up three hits with six strikeouts and one walk while lowering his ERA nearly a run, from 6.08 to 5.21, as a starter. The left-hander also has pitched four times out of the bullpen.

Hoskins and catcher Andrew Knapp combined on a stellar defensive play in the seventh to keep Philadelphia ahead. With runners on second and third and one out, Sanchez laid down a good bunt toward first with Jimenez hustling hard from third. In one motion, Hoskins scooped up the ball barehanded and tossed it to Knapp, who applied the tag on the headfirst sliding Jimenez.

"It was a sensational play," Kapler said.

"I think I executed a good bunt, but the play was even better," he said.

White Sox: Reliever Carson Fulmer was placed on the 10-day injured list with a strained right hamstring. Batting for the first time since high school, Fulmer got hurt hustling down the line on a groundout in the 14th inning Friday night. The White Sox recalled RHP Dylan Covey from Triple-A Charlotte. Covey entered in the seventh and pitched two scoreless innings of relief with a strikeout.

Phillies: INF/OF Scott Kingery was not in the starting lineup due to an ankle injury. Kapler said Kingery was available to pinch-hit.