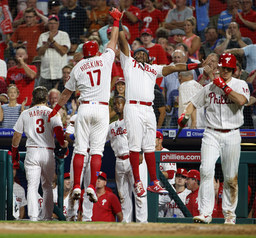 PHILADELPHIA (AP) Rhys Hoskins feels a fun vibe in the clubhouse of late, the kind that makes it easier for him to believe the Phillies can make a serious playoff push.

But having a couple of new arms in the rotation just might help a bit more in the pennant race.

Drew Smyly tossed seven shutout innings and Hoskins homered to lead Philadelphia to a 4-2 win over the San Francisco Giants on Tuesday night.

The Phillies took the first game of a three-game set between teams in the hunt for an NL wild-card spot. It was the first of seven games the teams will play over the next two weeks, and they could go a long way toward deciding which might play in October.

"We haven't played to our ability yet but the talent is still there," Hoskins said.

"I'm just trying to go a roll, keep hitters off balance and go with it," Smyly said.

Smyly allowed a run in six innings in his first start for the Phillies and was just as sharp against the Giants. The 30-year-old Smyly, signed last week after he opted out of a minor league deal with Milwaukee, could be a needed boost to a pitching rotation in flux. Smyly scattered four hits, struck out five and was never in any serious trouble, helping to send the Giants to their seventh straight loss in Philadelphia.

He should have stuck around at least another inning. Nick Pivetta continued to struggle in relief and allowed pinch-hit homers to Brandon Belt and Stephen Vogt in the eighth to make it 4-2.

Hector Neris worked a scoreless ninth for his 19thth save.

"It's just an off night for our bats," Giants manager Bruce Bochy said.

With Wednesday's trade deadline looming, the Phillies made a move this week to solidify their rotation for the stretch run when they acquired left-hander Jason Vargas from the New York Mets. The 36-year-old is 6-5 with a 4.01 ERA, winning his last three starts. Vargas is 98-95 with a 4.26 ERA in 266 starts and 21 relief appearances with five big league teams. He won 18 games for the Royals in 2017 and was part of their World Series championship team in 2015.

The Phillies beat Atlanta 9-4 on Sunday, and they could look different after the deadline.

"It's a rotation that we're confident gives us a chance," Kapler said. "I believe we'll be battling for a playoff spot till the end."

They'll battle for now with struggling righty Zach Eflin in the bullpen. The Phillies cleared a spot for Vargas in the rotation by dumping Eflin, who allowed seven or more runs in three of his last four starts, and hope he can work out his problems in relief. Eflin joins fellow former starter Pivetta in the bullpen, and Vince Velasquez just made a return to the rotation after a brief stint as a reliever.

"I still believe wholeheartedly that I'm a starter," Eflin said. "But if that's what the team needs, then I'm going to be there for them. It's ultimately not my decision."

The Phillies scored twice off Giants starter Tyler Beede (3-5) in the fourth inning and then chased him after with two more runs in the fifth. Beede walked Bryce Harper, and Hoskins followed with a shot to center for his 23rd homer of the year and a 4-0 lead.

Phillies: It seems unlikely that RHP David Robertson will return this season from an elbow injury. Kapler said Robertson's rehab had progressed "at a slower rate than we had hoped."