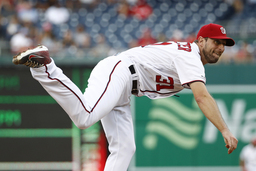 WASHINGTON (AP) With Max Scherzer on a pitch count and Washington's bullpen worn out from a doubleheader, manager Dave Martinez had a plan for how to get his staff through a game against the struggling Colorado Rockies.

Then the Nationals rallied to take the lead, and Martinez's best option was Fernando Rodney.

Ian Desmond led off the ninth with a homer off Rodney, and Daniel Murphy's run-scoring groundout helped the Rockies beat the Nationals 8-7 in a battle of worn-out bullpens on Thursday.

Rodney (0-4), the oldest player in the majors at 42 years old, has 327 career saves, but he also pitched in both games of Wednesday's doubleheader.

"We talked to Rodney before the game and he said he can close the game out, so that's what we had. All those guys came in and pitched today valiantly," Martinez said. "These guys have been doing an incredible job in the bullpen, so I'm proud of all those guys. Just couldn't finish it today."

Murphy homered and scored three times for the Rockies, who avoided a four-game sweep and won for just the fourth time in their past 20 games. Jairo Diaz (3-2) worked a scoreless eighth, and Wade Davis earned his 15th save.

Anthony Rendon hit a three-run drive for Washington, which wasted a chance to gain ground on first-place Atlanta in the NL East.

Scherzer had been sidelined by inflammation under his right shoulder. He was 7-0 with a sparkling 0.87 ERA in his previous seven starts, but he struggled with his command at times in his first start since July 6.

He allowed three runs and four hits while matching his shortest outing of the season. The three-time Cy Young Award winner struck out eight, increasing his NL-leading total to 189, and he hasn't lost since May 17, the last time he gave up three runs.

"There were some pitches today that I just didn't execute quite the way I wanted to, and that just happens when you don't pitch for a little bit," Scherzer said. "You just take this, move on, get better and sharpen everything back up."

Light-hitting Garrett Hampson drove a belt-high fastball from Scherzer over the wall in left-center for a two-run homer in the fourth, and Ryan McMahon, subbing for Nolan Arenado at third base, hit a two-run shot off Matt Grace in the sixth.

Trailing 5-3, the Nationals rallied in the sixth against Bryan Shaw. Brian Dozier and Victor Robles walked and pulled off a double steal, with Dozier taking off for third while Shaw held the ball. He hesitated and then decided to throw to second, but Robles slid in safely. Gerardo Parra lined the next pitch to right to score both runners, prompting a shark-chomping celebration by Nats fans to his walk-up tune, the children's novelty song "Baby Shark."

Trea Turner followed with a bloop single to score Parra and put Washington ahead for the first time.

Matt Adams homered in the seventh to give the Nationals a two-run cushion. Murphy responded with his 10th homer in the eighth, setting up Colorado's rally off Rodney, who had no regrets about volunteering to pitch with closer Sean Doolittle unavailable.

"I don't like to say no. You never know what's going to happen. More important, Max felt good and we won the series," Rodney said. "I think my velocity is there. It was one pitch. I don't know how he hit it down there, but that's baseball."

Rendon's homer in the fifth off erratic Jeff Hoffman tied it at 3. Hoffman walked four, hit a batter and threw 95 pitches in five innings.

Two-time Women's World Cup champion Ali Krieger, a northern Virginia native, threw out a ceremonial first pitch. Krieger, a veteran defender, made three appearances during this year's World Cup and was a second-half substitute during the Americans' 2-0 victory over the Netherlands in the final on July 7.

She was accompanied by her fiancee, Ashlyn Harris, a backup goaltender on the U.S. team who is also Krieger's Orlando Pride teammate.

"The support we've had since we've come home is incredible," Krieger said. "You pass people in the streets and they're just, like, `Congratulations.' It's just nice to know that everyone's watching women's football and really enjoying it and really supporting us."

"We're not going over there," Krieger said with a laugh. "We'll just give them a wave."

The Nationals activated Scherzer from the 10-day injured list and optioned catcher Raudy Read back to Triple-A Fresno.

Rockies: Arenado got most of the day off before striking out as a pinch hitter in the ninth. The All-Star went 2 for 11 in the first three games against Washington.

Nationals: RHP Jeremy Hellickson, on the 60-day IL with a right shoulder injury, will probably start throwing off a mound within two weeks, Martinez said.