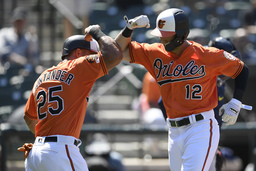 BALTIMORE (AP) Limited to just one measly run by the Baltimore Orioles in the opener of a split doubleheader, the Tampa Bay Rays cranked up the offense to earn a satisfying split.

Michael Brosseau and Nate Lowe each hit two of Tampa Bay's season-high six home runs, and the Rays pounded out a 12-4 victory Saturday night after absorbing a 2-1 defeat hours earlier.

"It was good to see the guys bounce back, have plenty of energy," manager Kevin Cash said. "You're going up against a really good pitcher. We could have been challenged and been quiet. But they stayed at it."

Tampa Bay hit half their homers off All-Star John Means (7-5) and continued the assault against the Baltimore bullpen.

Brosseau hit a two-run drive in the second inning and a solo shot in the ninth. Lowe went deep with a man on in the sixth and the ninth. It was the first career multihomer game for both players.

Yandy Diaz and Tommy Pham also homered for the Rays, who have won four of five to move within six games of the first-place Yankees in the AL East. Tampa Bay opened this series with a 16-4 rout, then managed only three hits on Saturday afternoon - all of them in the third inning - before regrouping in the nightcap.

"I know we had a hiccup there in Game 1, but in two out of three games we've really, really swung the bats well," Cash noted.

In the opener, Stevie Wilkerson hit a two-run homer to in the seventh to propel the Orioles to victory.

Not long after that, Baltimore traded its winningest pitcher, Andrew Cashner, to Boston for two 17-year-old minor league prospects. The swap hammered home the point that this year is significant to the rebuilding Orioles only in how it relates to the future.

While the Rays chase their first postseason berth since 2013, Baltimore is staggering through a major overhaul and carrying the worst record in the big leagues (28-64).

"We're a million miles away from being where we're going to be here sometime soon," manager Brandon Hyde insisted.

Charlie Morton (11-2) allowed two runs and six hits over six innings in the second game, outdoing Means in a matchup of two pitchers who were selected to the AL All-Star squad but didn't get into the game.

In the opener, Mike Zunino hit his 100th career homer for a 1-0 lead in the third. The score stayed that way until Wilkerson connected on a 2-2 fastball from Colin Poche (2-2).

The homer came less than 24 hours after Wilkerson - an infielder/outfielder - pitched a perfect ninth in a mop-up role.

"They're both good for the memory bank," Wilkerson said. "I'll never forget either of those. I'll take today's over yesterday's, for sure."

Richard Bleier (1-0) worked the seventh and issued a leadoff walk in the eighth before Mychal Givens finished for his seventh save.

Added from Triple-A Durham as the 26th man for the doubleheader, Tampa Bay starter Brendan McKay allowed three singles over five shutout innings and struck out seven . It was the third career start for the lefty, the second in which he did not give up a run.

Rays: 1B Ji-Man Choi (ankle) was reinstated from the injured list after the minimum 10-day stay. RHP Ian Gibaut was optioned to Triple-A Durham. ... Reliever Chaz Roe (flexor strain) has been shut down from baseball activities. The team hopes to learn the extent of the problem after it returns home on July 19. ... 2B Brandon Lowe (bruised shin) is still walking with a limp. ... Matt Duffy (hamstring) had a hit and three RBIs for Durham on Friday. The infielder will play several more games in the minors before being re-evaluated. ...

Orioles: RHP Dylan Bundy was placed on the 10-day IL with tendinitis in his right knee. Bundy (4-11, 5.28 ERA) gave up seven runs in the first inning of a 16-4 loss on Friday night before being pulled. Hyde hopes Bundy misses only one start. ... RHP Nate Karns (forearm strain) gave up three runs in 2/3 innings of a rehab start with Class A Frederick on Friday night. "The velo is up, he feels good physically, the results just weren't there for him," Hyde said.

Rays: RHP Ryne Stanek (0-2) gets the call Sunday when the Rays seek to win their ninth series on the road compared to three losses and three splits.

Orioles: Cashner was the scheduled starter for Sunday, so Hyde will have to scramble to find a replacement.