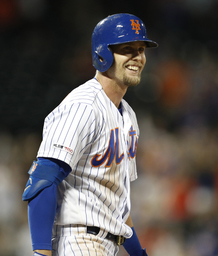 NEW YORK (AP) What began as a thrilling day for Mets youngsters Jeff McNeil and Pete Alonso got even better by the time the night was over.

The freshly minted All-Stars had the big hits in a five-run eighth inning that rallied New York past the Atlanta Braves 8-5 on Sunday, snapping its seven-game losing streak.

"Me and him kind of feed off each other," Alonso said. "He's a sparkplug. We just have really good chemistry. I love him hitting in front of me."

Todd Frazier launched a long homer to begin the comeback and finished with three hits and two RBIs.

McNeil, batting a major league-best .348, and J.D. Davis also had three hits apiece for the Mets (38-47). They prevented a three-game sweep by the NL East leaders and won for only the fifth time in 18 games.

"Felt good," Frazier said. "It had to happen sometime."

After a day off Monday, the Mets host the crosstown-rival Yankees for two Subway Series games at Citi Field.

"We've got to carry this momentum on into Tuesday," Alonso said.

Hours earlier, Alonso became the first Mets rookie position player to make the All-Star team. His buddy McNeil - in his first full big league season - also was selected as a reserve on the National League squad for the July 9 game in Cleveland.

"They breed confidence," Frazier said. "Sky's the limit for those two."

Frazier trimmed it to 5-4 with a leadoff homer in the eighth into the second deck in left field on an 0-2 pitch from Sean Newcomb (2-1).

New York loaded the bases with two outs when A.J. Minter walked Michael Conforto, and McNeil looped a two-run single into shallow right field to put the Mets ahead.

"I guess maybe got a little lucky. It was a good pitch. He did what he wanted to. He jammed me. It just happened to fall in," McNeil said. "It's a great team win."

Alonso followed with a two-run double inside third base to provide some breathing room.

"I don't know how you get them out," Braves manager Brian Snitker said. "McNeil, I just sat back the whole series and hoped he'd hit it at somebody. I don't know what you do. The kid's something else. He puts the bat on the ball about as good as anybody you'll see and you've really got to make pitches and hope he hits it at somebody. Alonso, too. They're two good young hitters."

Struggling reliever Edwin Diaz finally closed one out for New York's beleaguered bullpen, striking out two in a perfect ninth for his 17th save in 21 tries.

"I just stay positive every time," Diaz said through a translator. "I know last Thursday I had a bad outing in Philadelphia, but I leave that in the past."

Wilmer Font (2-2) retired all six batters he faced for his first win with the Mets. Noah Syndergaard came off the injured list and allowed three runs in 5 2/3 innings.

Freddie Freeman gave Atlanta a 5-3 lead in the seventh with a two-run double off the left field fence against Chris Flexen.

Acuna, who plans to participate in the All-Star Home Run Derby, took a long look at his 437-foot solo shot to right-center off Syndergaard in the third.

Atlanta tied it at 3 on Johan Camargo's run-scoring single in the sixth off Syndergaard, who walked three batters in one inning for the first time in his career.

Atlanta set a franchise record for home runs in one month with 56, two shy of the major league mark shared by Baltimore (May 1987) and Seattle (May 1999). ... Freeman had 33 RBIs in June, most by a Braves player in any month since the club moved to Atlanta in 1966.

Braves: RHP Anthony Swarzak was placed on the 10-day injured list with inflammation in his pitching shoulder. The team hopes the right-hander will be ready to return immediately after the All-Star break on July 12. ... 2B Ozzie Albies sat out but was available off the bench, Snitker said. Albies exited Saturday's game after getting hit by a pitch on the inside of his left elbow.

Mets: Syndergaard was reinstated from the IL after being sidelined since June 16 with a strained right hamstring. Veteran outfielder Carlos Gomez was designated for assignment. ... Three injured members of New York's bullpen had minor league rehab outings: RHP Jeurys Familia (shoulder) struck out two in a scoreless inning for Triple-A Syracuse; LHP Luis Avilan (sore elbow) whiffed three in 1 1/3 hitless innings at Syracuse; and LHP Justin Wilson (sore elbow) fanned two in a scoreless inning with Class A Brooklyn. ... 2B Robinson Cano was hit on the right hand by a 96 mph fastball in the eighth. He was checked by a trainer but stayed in the game.

Hot dog eating king Joey Chestnut threw out a ceremonial first pitch from the mound. Considering he had a large Nathan's Famous championship belt slung over his shoulder - and was scarfing down a frankfurter at the time - Chestnut made a pretty accurate toss to home plate. McNeil is set to be a judge for Thursday's annual contest at Nathan's on Coney Island, where Chestnut downed a record 74 dogs last year. He was wearing a No. 74 Mets jersey in the stands when Mr. Met brought a tray of franks to Chestnut and dozens of fans in hot dog costumes between innings.