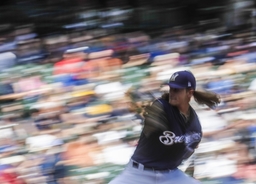 MILWAUKEE (AP) Facing the prospect of a three-game sweep by the last-place Seattle Mariners, the Milwaukee Brewers rediscovered their winning formula.

Orlando Arcia hit a three-run homer and the Brewers snapped a two-game skid with a 4-2 victory over the Mariners on Thursday.

"We needed it," outfielder Christian Yelich said. "That's the kind of game we're accustomed to playing. That's us, as a team, that kind of game but it just hasn't worked out for us over the last few weeks. It's been a tough stretch, for sure, but we showed signs of getting back on track and doing what we're capable of."

Yelich narrowly missed his MLB-leading 30th home run of the season in the first inning. The Brewers wouldn't threaten again until the fourth when Mike Leake loaded the bases with one out to bring up starting pitcher Chase Anderson.

Anderson put down a near-perfect suicide squeeze to score Ryan Braun. And one pitch later, Arcia sent a three-run blast to right.

Chase Anderson (4-2) bounced back after he allowed six runs in his previous start. Anderson allowed two runs, one earned, and struck out six in 5 1/3 innings.

"Chase was really good today. I thought just the command of his pitches is what stood out," Brewers manager Craig Counsell said. (Catcher Yasmani Grandal) did a really nice job of sequences. It wasn't necessarily the strikeouts that stood out, it was the popups and the lazy fly balls."

Leake (7-7) allowed four runs, eight hits and a walk while striking out five over six innings.

"I could have placed (the pitch to Arcia) a little better," Leake said. "I could have gone off the plate and tested where he was at first instead of going right at him.

"That one inning was the blemish."

Josh Hader struck out three batters over the final two innings to earn his 19th save of the season.

Anderson said he hadn't executed a suicide squeeze since he was 13 years old, cashing in on a couple of errors and scoring the winning run to lead a group of seventh graders against a team of eighth graders.

"It's kind of crazy to be able to do that in that moment, sparking a rally," Anderson said. "Getting it started and being an impact with the bat is a huge advantage for a starting pitcher."

Seattle outfielder Domingo Santana went 0-for-4 with a pair of strikeouts, ending his nine-game hitting streak. He batted .353 (12-for-34) during that run with four doubles, four home runs and 11 RBIs. He had two hits, including a double and two RBIs in the first two games against Milwaukee, which dealt him to the Mariners in an offseason trade.

"It was nice to come back here," Santana said. "The fans really appreciate me and showed it to me. The team - I have a good chemistry with them. I really enjoyed being a Brewer so it was really fun to come back."

Mariners: 3B Kyle Seager got the day off again Thursday, still feeling sore after injuring his right hand during an at-bat in the series opener.

"For me, there's no reason to rush him back for a day game after a night game." Mariners manager Scott Servais said. "We'll give him another day today. We'll see how he is over in Houston. He felt it in the swing. I don't feel it will be a big issue."

Brewers: OF Lorenzo Cain was back in Milwaukee's lineup Thursday, two days after receiving a cryogenic treatment on his ailing right thumb, but batted sixth instead of his usual leadoff spot - where Grandal has been performing well of late.

Counsell said he plans to move Cain back into that spot, but wants to make sure he's playing at full strength.

"I don't think how we line up is going to determine our fate," Counsell said. "It's playing well."

Brewers: It's back to the NL Central for the Brewers, who send RHP Jhoulys Chacin (3-8, 5.88 ERA) against RHP Chris Archer (3-6, 5.56) and the Pittsburgh Pirates in the opener of a three-game series at home.