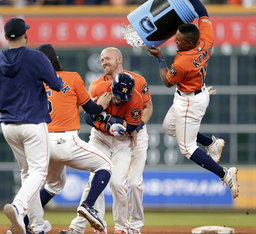 HOUSTON (AP) Houston manager AJ Hinch isn't sure if Yuli Gurriel touched the plate on his team's winning run in the 11th inning on Friday night against the Baltimore Orioles.

Robinson Chirinos hit an RBI double with two outs in the 11th inning to lift the Astros to a 4-3 victory that ended with a lot of confusion.

Gurriel singled with one out in the 11th before Chirinos hit a line drive to left field off Branden Kline (1-3), sending Gurriel home. The throw to the plate beat Gurriel, but catcher Chance Sisco bobbled it, allowing Gurriel to score.

The play was reviewed, but stood.

"You can't really tell did Yuli touch the plate or not," Hinch said. "Whatever he called was going to be the play that he saw. He's the closest guy there ... it's a tough play and nearly impossible to be perfect. I'm still not sure what happened, but I like the ruling."

It was the second straight extra-inning game for the Astros, who beat the Mariners 8-7 in 14 innings on Thursday.

The Astros have won seven of eight games and their 44-21 record ties a franchise record set in 2017 for most wins through 65 games.

Rio Ruiz drove in two runs in the first and Sisco hit a solo homer that put the Orioles up 3-0 in the third.

Josh Reddick had a solo shot in the fifth before Tony Kemp tied it with a two-run homer later in the inning.

Houston starter Gerrit Cole yielded four hits and three runs - one earned - in seven innings. He struck out a season-high 14 to give him an MLB-leading 130 strikeouts this season. It's his most strikeouts since he fanned a career-high 16 on May 4, 2018, against the Diamondbacks.

Cionel Perez (1-0), who was recalled from Triple-A Round Rock on Friday, struck out two in three perfect innings for the first win of his career.

"He's had a rough season in Triple-A - strike-throwing has been an issue for him in Triple-A," Hinch said. "And he throws a ton of strikes and is really conservative with his pitches for his pitch total (Friday). No hits, huge innings, just an incredible night for him."

Reddick singled with one out in the ninth to chase Richard Bleier. He was replaced by Mychal Givens and he retired Robinson Chirinos before Reddick stole second base and advanced to third on an error by catcher Sisco. But Givens struck out Tyler White to send it to the 10th.

Baltimore's Gabriel Ynoa, who was making his third start and 12th appearance, allowed three runs and three hits in a season-high six innings.

Santander doubled with one out in the first before Trey Mancini reached on a throwing error by Gurriel, when his throw to first was high, forcing White off the base. Houston challenged the call, but it was upheld. Cole plunked Stevie Wilkerson with two outs to load the bases before Ruiz's single scored two to give Baltimore the early lead.

There were two outs and Sisco had two strikes when he sent a curveball from Cole into the seats in left field for his first homer this season to make it 3-0.

The Astros had managed just one hit when Reddick homered into the bullpen in right-center with no outs in the fifth inning to cut the lead to 3-1. Tyler White walked with one out before Kemp launched one into the stands in right field to tie it at 3-all.

Cole sailed through his outing after the homer by Sisco in the third. He retired 13 of the last 14 batters he faced with nine strikeouts. Baltimore's only baserunner in that stretch came on a single by Santander with two outs in the fifth.

Orioles: Baltimore placed OF Dwight Smith Jr. on the concussion list on Friday, a day after he was injured crashing into an outfield wall after making a catch against the Rangers. Hyde said the X-rays on his shoulder were negative but that he's going to be out "a little while" after sustaining a concussion. "It was a pretty bad crash into the wall," he said. "So these things take time." Santander was recalled from Triple-A Norfolk to take his spot on the roster.

Astros: OF George Springer (hamstring), INF Aledmys Diaz (hamstring) and 2B Jose Altuve (leg fatigue) all were examined by the team doctor on Friday and are all improving. Hinch said all three players could begin rehabilitation assignments during this homestand, which ends on June 16.

Orioles: RHP Andrew Cashner (6-2, 5.04 ERA) will start for Baltimore on Saturday. Cashner allowed eight hits and tied a season high with six runs in five innings but got the win in his last start as the Orioles beat the Giants 9-6.

Astros: LHP Framber Valdez (2-2, 3.12) will move out of the bullpen to make his first start of the season on Saturday. Valdez, who has made 14 relief appearances this season, will be making his sixth career start.