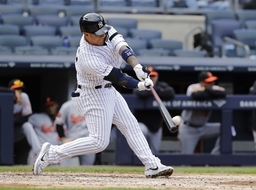 NEW YORK (AP) Gleyber Day turned into something of a nightmare for the Baltimore Orioles on Wednesday.

Gleyber Torres hit three home runs during a doubleheader sweep, including a solo shot in the nightcap, and Domingo German became the majors' first eight-game winner in the New York Yankees' 3-1 victory over Baltimore.

Playing a twinbill after rainouts Monday and Tuesday, Torres hit two of New York's four homers during a 5-3 win in the opener. The 2018 All-Star has eight homers this season, and six have come against the Orioles.

"We got two days in a row off," Torres said. "I think everyone was rested."

The Yankees announced during the second game that third baseman Miguel Andujar, last year's runner-up for AL Rookie of the Year, will have season-ending surgery to repair a small labrum tear in his right shoulder Monday.

"Hurt for him a little bit," manager Aaron Boone said. "But know this is also just the beginning of the road back."

Aroldis Chapman closed out both games, giving him 11 saves in 12 chances. Zack Britton also pitched a scoreless inning in each game.

German (8-1) matched a career high with seven innings, allowing a run and striking out eight. He threw first-pitch strikes to 21 of his 27 batters and has a 2.41 ERA in a breakout season.

The 26-year-old right-hander loaded the bases with two outs in the seventh but escaped on Joey Rickard's groundout to preserve a one-run lead.

"That whole inning, that's a big experience for me," German said through a translator. "Very happy that (manager Aaron Boone) allowed me to pitch through that inning."

German is the first Yankee since Tommy John in 1979 to win eight of his first nine appearances to start a season, according to the Elias Sports Bureau.

"This doesn't mean I take my foot off the pedal," German said.

Andrew Cashner (4-2) pitched six innings of two-run ball, striking out seven. He was visited by a trainer in the third after DJ LeMahieu's comebacker struck him in the left thumb. He stayed in, and Luke Voit drilled his next pitch off the wall in left-center for an RBI double.

"I thought it was some of the best stuff he's had all year," manager Brandon Hyde said. "From the first inning he was 95, 96 with a really good breaking ball."

Voit's hit ended his 0-for-18 skid. He added two more hits, including an RBI single in the eighth.

The 22-year-old Torres joined Joe DiMaggio as the only Yankees under 23 years old with three homers in a day. DiMaggio had two three-homer days at 22 or younger - during a doubleheader in 1936 and a three-homer game in 1937, according to STATS.

Playing a single-admission doubleheader after consecutive rainouts, the Yankees filled the seats with souvenirs before most fans had arrived for the first game- the result of an odd 3:05 p.m. start time.

The Orioles have allowed 89 homers through 42 games, by far the most in the majors. That puts them on pace to give up 343 for the season, which would smash the record of 258 by the 2016 Cincinnati Reds.

"It's too many home runs," catcher Austin Wynns said. "It's embarrassing. We have to put an end to that."

Yankees left-hander J.A. Happ (3-3) was pulled after 5 1/3 innings and 64 pitches. He allowed three runs and five hits, including solo homers to Trey Mancini and Renato Nunez.

The opening game wrapped in a tidy 2 hours, 12 minutes.

A day after being acquired by New York from Oakland, veteran slugger Kendrys Morales arrived in the Bronx during Game 1 and was put in the Game 2 lineup as designated hitter. Morales had an infield single in the eighth and walked twice.

Center fielder Aaron Hicks was also in the nightcap lineup, his first appearance since straining his back in spring training. Hicks was 0 for 4 with three strikeouts, admitting he was nervous for his first at-bat of the season.

Orioles: RHP Evan Phillips was brought up as the team's 26th man.

Yankees: Open a three-game series against Tampa Bay on Friday with LHP CC Sabathia (2-1, 3.26) set to pitch. Sabathia has had heated exchanges with the Rays the last two times he faced them, upset over plunked New York hitters. Tampa Bay hadn't announced a starter.