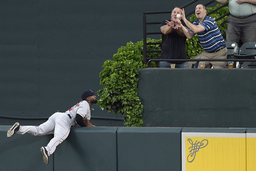 Villar connected in the second inning off Josh Smith (0-1), who was making his first start with Boston. The drive came after Villar was denied a first-inning double when a fan reached over the 7-foot wall and interfered with left fielder J.D. Martinez's effort to make a catch.

"Very happy because that's my second grand slam in the major leagues," Villar said. "Not only for me, but for the team."

Means (4-3) allowed three hits, struck out four and walked none. Making his fifth career start and 10th big league appearance, the rookie shut down a power-laden club that scored 30 runs in a three-game weekend sweep of the White Sox.

"That was fantastic, to go seven innings against a really good ballclub with a really good lineup that's playing well and really swinging the bat," Baltimore manager Brandon Hyde said. "For a young guy in really his first year, that was awesome."

Means had never pitched into the sixth inning or allowed fewer than four hits in a starting role.

After Paul Fry got two outs in the eighth, Mychal Givens completed the three-hitter to earn his fourth save.

Christian Vazquez led off the fifth with a double and scored on a sacrifice fly by Eduardo Nunez for Boston's only run. After winning six of seven, the Red Sox (17-19) were trying to get to .500 for the first time since March 29, when they were 1-1.

Manager Alex Cora succinctly summed up the game by first giving credit to Means, then Villar.

"He kept us off balance with his changeup, with his fastballs. We didn't do much against him," Cora said. "Just one pitch, and it wasn't that bad a pitch to Villar. It looked like he was sitting on it."

Boston's streak of six consecutive games with a home run ended. The Red Sox clubbed a dozen long balls in that span and led the majors with 10 in May.

"It's going to happen," Cora said of his team's offensive showing. "You don't like it, but sometimes you have to give credit to the pitcher."

Earlier in the day, Boston placed lefty David Price on the 10-day injured list with tendinitis in his pitching elbow. Although the 2012 AL Cy Young Award winner has a history of elbow problems, he insisted, "This is nothing."

In the second inning, Smith gave up two singles and a walk to load the bases. After notching two straight strikeouts, he served up a pitch that Villar put well over the center-field wall.

"Striking out those two guys, that was in a pretty big situation to keep it 0-0 and maybe get some momentum," Smith said. "I threw a curveball (to Villar) and maybe got too much of the plate, but it was definitely at the bottom of the zone and he did a good job of hitting it."

Boston's Mookie Betts went 0 for 4, ending his streak of reaching base in 28 successive games against Baltimore. ... Red Sox DH Rafael Devers' career-high run of reaching base in 19 straight games ended with an 0-for-3 outing. ... Boston was 11-1 in its last 12 games at Camden Yards.

Red Sox: 2B Dustin Pedroia (knee) will continue his rehab assignment by playing in three straight games for Double-A Portland beginning Tuesday, Cora said. ... Utility player Brock Holt (shoulder) could resume his rehabilitation assignment this weekend. He was placed on the IL with a scratched cornea but developed a sore shoulder while playing for Triple-A Pawtucket late last month.

Red Sox: Hector Velazquez (0-2, 3.72 ERA) will start Tuesday night in place of Price. It will be his 11th appearance, the fifth as a starter.