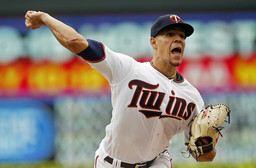 MINNEAPOLIS (AP) After a lopsided sweep of the rebuilding Baltimore Orioles to start their homestand, the Minnesota Twins faced a much better test of their strong start to the season with a four-game series against the Houston Astros.

Buoyed by a well-balanced lineup and some solid starting pitching, the Twins won three times while surging to the best record in the American League.

"It's nice to get three out of four, and we're just going to continue to play our game and focus on keeping our heads down and playing and trying to be consistent," Castro said. "Just doing what we do to make us good."

One of those assets has been production from the catcher position, where Mitch Garver and Willians Astudillo have contributed plenty of offense when they've played.

Even the defense-oriented Castro, who came over from the Astros in 2017 as a priority for the pitching staff, has a .915 on-base-plus slugging percentage after homering for the third time in his past five games.

Castro started the third with a solo shot against Peacock (2-2), who allowed eight hits, seven runs and two walks in 3 2/3 innings. The Twins sent 10 men to the plate in a six-run fourth, with a two-run double by Castro and an RBI triple by Byron Buxton highlighting the damage.

"I felt pretty good today. I'm not going to lie. That's a great team over there, and they took some good swings," Peacock said.

With 52 home runs in 29 games, the Twins are tied with the Los Angeles Dodgers for the third-most in the major leagues. They've played four fewer games than the Dodgers, Milwaukee Brewers (59) and Seattle Mariners (60).

"If you want to be the best, you've got to beat the best," said Jonathan Schoop, who had two more hits and raised his career batting average against the Astros to .364 with six homers and a .987 on-base-plus-slugging percentage in 27 games.

Berrios (5-1) finished seven smooth innings with seven hits and two runs allowed to push the Twins to their first season series victory over the Astros since 2013. Berrios is 4-0 with a 1.98 ERA in four starts at home this year, performing every bit like the ace he's been groomed to be. Twins starters have finished seven or more innings in four of the past five games.

"We play well, so well. I enjoy watching this group out there in the ballpark," Berrios said.

Buxton had another stellar game in the field , too, with a running catch to snag Josh Reddick's sinking liner in the second and a flying grab in front of the wall in right-center to rob Yuli Gurriel in the fourth.

Alex Bregman gave the Astros a first-inning lead with his home run, but the right-hander retired 12 straight batters at one point and sailed behind the big lead. The Astros, who entered the game tied for 21st in the majors with a .232 batting average with runners in scoring position, went 1 for 7.

"We've just got to do a better job of stringing at-bats together," Bregman said, adding: "We're in first place, but we'll figure it out."

Marwin Gonzalez scored twice for the Twins with a double, a single and a walk to finally break through against his former team. Prior to the game, the third baseman was 0 for 18 with six strikeouts against the Astros.

"The first month, I was kind of rough," Gonzalez said, adding: "I've been feeling good lately. I'm putting some good swings on it."

Twins: LHP Adalberto Mejia, who has an 8.74 ERA in 11 relief appearances, was placed on the injured list with a strained right calf. RHP Mike Morin, who has 186 major league appearances over the past five years, was promoted from Triple-A Rochester and added to the 40-man roster.

Astros: After a rare day off on Friday, LHP Wade Miley (1-2, 3.24 ERA) pitches on Saturday night to start a two-game series in Monterrey, Mexico, against Los Angeles. RHP Trevor Cahill (1-2, 5.93 ERA) takes the mound for the Angels. Miley has allowed three runs or fewer in each of his six starts.