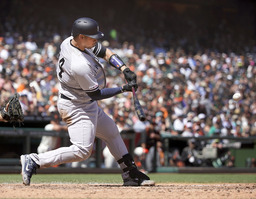 SAN FRANCISCO (AP) The New York Yankees keep on getting hurt - and winning.

DJ LeMahieu and Gio Urshela became the latest Yankees to get hurt as New York completed a three-game sweep of the San Francisco Giants with an 11-5 win Sunday that included another long home run by Gary Sanchez.

"I've always felt with this team, through ups and downs, they're really good at turning the page," Yankees manager Aaron Boone said. "But there is an extra focus right now with what we're going through. Guys are coming in ready for any kind of role, any kind of situation, and they're delivering."

LeMahieu was removed in the bottom of the third because of right knee inflammation. LeMahieu fouled a pitch off the knee on Friday night and had the knee wrapped with ice after Friday's and Saturday's games. In his first season with the Yankees, LaMahieu is hitting .310 with 15 RBIs.

Urshela left after he was hit on his left hand by an 88.5 mph cutter from Nick Vincent in the fifth. Urshela had two hits Sunday and is batting .351 with six RBIs in 57 at-bats.

The Yankees said X-rays on both players were negative. LeMahieu is scheduled to undergo an MRI on Monday.

"It's the story of the season, besides winning a bunch of games lately," LeMahieu said. "It's frustrating."

New York has had 15 players on the injured list this year and just two have come back: Sanchez and pitcher CC Sabathia. Still, the Yankees are 6-1 on a western trip after outscoring the Giants 21-12, and New York improved to a season-best six games over .500 at 17-11 by winning for the 11th time in 13 games.

With a depleted bench, the Yankees used pitcher J.A. Happ as a pinch-hitter in the seventh inning, and he grounded out.

"Just proud of how they've rallied around one another," Boone said. "We've got really good makeup in that room. It's something that's important to us, to have those kind of people. And I think we have that in spades in there with guys that are tough, that are prepared."

Sanchez and Gleyber Torres hit two-run homers as the Yankees built an 8-0 lead by the sixth inning, and Luke Voit added three hits and a walk to extend his on-base streak to 39 games

Domingo German (5-1) took a shutout into the sixth before tiring and tied for the major league lead in wins. He allowed four runs and five hits in six innings.

After New York took a 2-0 lead in the first, Voit doubled the advantage with a two-run single in the second and Torres homered in the third. Sanchez's sixth-inning drive left the bat at 111.8 mph and traveled 430 feet, landing near the top of the left-field stands. That nearly matched Sanchez's first career grand slam Saturday that traveled 467 feet.

Kevin Pillar homered and had three RBIs for the Giants, last in the NL West at 11-17.

"It was a rough series for the starters," manager Bruce Bochy said. "They all gave up at least five. It's hard to win games like that."

in on what we need to do to try and be the best." Boone when asked if he is a better manager than he was a year ago.

Yankees: OF Clint Frazier (left ankle sprain) did some light hitting and ran on a treadmill. Frazier is expected to do more intense running when the team plays in Arizona.

Giants: OF Steven Duggar is day to day with a wrist injury he sustained stumbling over the bullpen mound near right field on Friday. Duggar had X-rays on Saturday, which were negative.

Yankees: Sabathia (1-0, 2.40 ERA) pitches against the Diamondbacks in Arizona on Tuesday. The big lefty needs three strikeouts to reach 3,000.

Giants: RHP Jeff Samardzija (2-1, 3.00) makes his first start against the Dodgers since 2017 at Oracle Park on Monday. Samardzija has lost four of five decisions in eight appearances against Los Angeles.