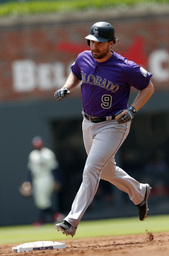 ATLANTA (AP) Josh Donaldson and Luke Jackson provided big lifts for the Atlanta Braves, who needed reminders of how to win at home and how to protect a lead.

Donaldson hit a three-run homer in the eighth, Atlanta's fourth home run of the game, and Jackson helped the Braves' bullpen survive a ninth-inning scare for an 8-7 victory over the Colorado Rockies on Sunday.

Right-hander Seunghwan Oh (1-1) flung his glove into the air in frustration as he stood on the mound and watched Donaldson's homer land in the right-field seats . Oh gave up singles to Tyler Flowers and Ozzie Albies, who hit two homers, before Donaldson's blast.

"Those are the games you win in those kind of situations that can really turn around the season for you," said Freddie Freeman, who hit a two-run homer in the first and was on deck when Donaldson hit the opposite-field homer.

"He's been hitting the ball hard and it's been getting caught," Freeman said. "... I knew that one was out."

The Braves ended a stretch of five straight home losses, including the first two games of the three-game series with the Rockies.

Braves closer A.J. Minter gave up singles to Charlie Blackmon and Trevor Story to open the ninth. Minter, who was charged with a blown save and loss while giving up four runs in Saturday night's 9-5 loss, was pulled after Daniel Murphy's fly ball to center field for the first out.

Jackson earned his first save when Nolan Arenado hit a fly ball to shallow left field, caught by a charging Johan Camargo, and David Dahl grounded out to the mound.

Braves manager Brian Snitker said he turned to Jackson for a better matchup against Arenado.

"Luke's been on attack mode and that was a big, big moment right there," Snitker said.

It was a much-needed winning performance for the bullpen. Atlanta has lost leads in 11 of its 14 losses and blew a 3-0 lead on Sunday as Murphy hit a three-run homer in a four-run third.

Ian Desmond's homer in the sixth off Dan Winkler gave the Rockies a 6-5 lead.

Jacob Webb (1-0) recorded the final out in the eighth.

Left-hander Jerry Blevins, acquired before the game from the Oakland Athletics for cash, recorded one out with one walk in the seventh in his Atlanta debut. Blevins, 35, posted a 4.85 ERA in 64 games with the New York Mets last season. He had a 1.69 ERA in seven games with Triple-A Las Vegas this season. Atlanta optioned right-hander Wes Parsons to Triple-A Gwinnett and transferred right-hander Arodys Vizcaino to the 60-day injured list.

Rockies: Story remained in the game after he was hit high on the left side of his back by Chad Sobotka's fastball in the seventh. Story crouched in pain while receiving attention from a trainer before rising and walking slowly to first.

Braves: The Blevins trade addressed a shortage of left-handers in the bullpen with Jesse Biddle (right thigh contusion, right groin strain) and Jonny Venters (right calf strain) on the IL. The Braves are being patient with Venters, who has been out since April 15 and is eligible to return.

There were a combined six home runs in the game. The Rockies, who hit seven homers in the series, felt right at home. "Atlanta is turning into the new Coors Field, I think," Desmond said.

Freeman has reached safely in all 27 games, matching the Atlanta-era record to begin a season. J.D. Drew opened the 2004 season with a 27-game streak. Eddie Mathews set the Braves franchise record with a 37-game streak for Milwaukee in 1961.

Rockies: LHP Kyle Freeland is expected to come off the 10-day injured list and start when Colorado opens a four-game series at Milwaukee on Monday. Freeland has been out since April 19 with a blister on his left middle finger.