Voit homers, drives in 3 to power Yankees past Giants, 7-3 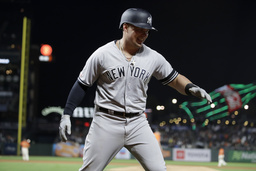 Despite having a major league-high 13 players on the injured list, the Yankees have won seven of their last eight games and nine of their last 11.

Voit extended his career-best hitting streak to 13 games. He's batting .367 (18 for 49) over that stretch with four homers and 10 RBIs. He has reached base safely in a career-best 37 straight games dating to last season.

Buster Posey had a double and two RBIs for the Giants, who were seeking their first four-game winning streak.

James Paxton (3-2) gave up three runs in 5 2/3 innings of five-hit ball after combining for 14 shutout innings in his previous two starts. He struck out eight and walked none.

The hard-throwing lefty has 32 strikeouts over his last 19 2/3 innings.

The Giants threatened in the bottom of the seventh when Zack Britton issued three straight two-out walks. Yankees manager summoned Adam Ottavino to face Posey, and the right-hander froze Posey on a 2-2 slider for a called third strike.

Giants starter Madison Bumgarner (1-4) gave up five runs on 11 hits in 5 2/3 innings. The 2014 World Series MVP struck out five and walked none.

The Giants ended the second-longest, first-inning scoring drought to start a season in major league history on Posey's one-out sacrifice fly off Paxton.

San Francisco had not scored in the first inning of its first 25 games. The major league record of 28 games at the start of a season was set by the 1948 Chicago White Sox.

The Yankees are playing in San Francisco for just the second time since the 1962 World Series. The Yankees are 8-5 against San Francisco in 13 games since the inception of interleague play. . The Giants commemorated their seventh annual "Metallica Night" with the Grammy Award-winning rock band performing the national anthem.

Yankees: 3B Miguel Andujar (torn labrum) played five innings in his first intrasquad game at the team's minor league complex in Tampa, Florida. Andujar went 2 for 3 Friday with a two-run homer and a walk. The 24-year-old will probably DH on Saturday, play another extended spring training game on Monday and then rehab with Single-A Tampa, manager Aaron Boone said. "If it continues to go well, a chance he could be back with us next weekend when we get home," Boone said. . SS Troy Tulowitzki, out since April 3 with a strained left calf, hit in a simulated game. . RHP Ben Heller, recovering from Tommy John surgery, is throwing to hitters. . RHP Danny Farquhar remains at extended spring training to build arm strength.

Giants: 1B Tyler Austin was back in the lineup after missing four straight games with right elbow inflammation. . Prospect Heliot Ramos injured his left knee taking a swing on Wednesday with Single-A San Jose. The team's top pick (19th overall) in the June 2017 amateur draft was placed on the seven-day IL.