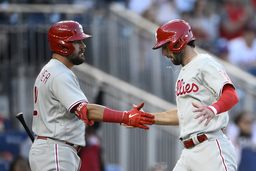 The Philadelphia Phillies will go for their sixth straight win when they wrap up a rare five-game series against the host Washington Nationals on Sunday.

Philadelphia hasn't swept a five-game series since 2001 at home against the Marlins.

In his last start, Eflin allowed four runs on five hits over six innings in a no-decision against the Marlins. He was pulled after throwing only 80 pitches due to soreness in his surgically-repaired right knee.

Eflin came through a series of tests on his patellar tendon and threw a bullpen session on Friday.

"That's really what we were worried about," interim manager Rob Thomson said of his pitcher's knee. "So it was good news."

Eflin has a 7.13 ERA in away games this season.

Tetreault, 26, was called up from Triple-A Rochester to make the start in place of the injured Stephen Strasburg on Tuesday.

Tetreault allowed seven runs on nine hits over four innings against the defending champion Braves in his major league debut.

"Obviously not the result I was looking for," he said. "But still, I'm not going to shy away. I'm eager to get back out there and throw again. Just happy to get the first one under my belt."

Three of those hits were homers, including back-to-back shots. He struck out the first batter he faced, but Dansby Swanson followed with a homer.

On Saturday, the Nationals rallied to tie the game 1-1 on a two-out RBI single by Lane Thomas in the ninth, but they couldn't get the game winner.

Philadelphia's Rhys Hoskins drove in the go-ahead run with a single in the 10th inning and Seranthony Dominguez retired the Nationals in order in the bottom half.

That made a winner of Brad Hand, who's blown save canceled out eight innings of shutout baseball from Aaron Nola.

"It's a pretty good run we're on, that's for sure," Thomson said. "We've just got to keep it going. Stay consistent. We've got a good club. We knew that coming out of spring training. We just got off to a little bit of a slow start."

Phillies outfielder Bryce Harper (blister on his left index finger) was scratched from the starting lineup.

Juan Soto had two walks and a single for the last-place Nationals, who have lost eight straight.

"We're in a little rut right now, but about a week before we were playing pretty good baseball," Nationals starter Josiah Gray, who left after six shutout innings, said. "So continue to get back to those winning ways. And we're going to get there soon."