Phillies seek seventh win in a row for interim manager vs. D-Backs 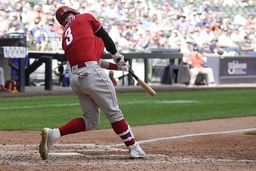 When the Philadelphia Phillies fired manager Joe Girardi after a sluggish start, they were hoping for a spark.

The Phillies won their seventh straight game, 8-3, on the road against the Milwaukee Brewers on Thursday. They are 6-0 under interim manager Rob Thomson.

Thomson is the first manager to win his first six games since Felipe Alou went 7-0 with the San Francisco Giants in 2003.

The host Phillies will now look for their eighth win in a row when they open a series against the Arizona Diamondbacks on Friday.

Harper, Kyle Schwarber and Odubel Herrera each homered on Thursday.

The Phillies will aim to match an eight-game winning streak for the first time since Aug. 1-8, 2021.

Coming off consecutive three-game sweeps, the home crowd will surely be revved up.

"Seeing (Citizens Bank Park) like that, it's so much fun," Harper said. "But we have to win. Everybody knows that. You win games, they show up. If you don't, they're not going to show up. And I don't blame them. I probably wouldn't either. We've got to keep going, keep playing the games we do."

After dropping two straight to the reeling Cincinnati Reds, the Diamondbacks rallied to win the final two contests to split the four-game series.

The Diamondbacks will now look for their third consecutive victory.

On Thursday, Arizona rallied for four runs in the ninth inning to secure the comeback 5-4 win.

Josh Rojas produced the go-ahead two-run single in the ninth.

"We have so much more momentum," Rojas said. "This is such a momentum game. You lose that game, it's a completely different feeling here. You might get some panic even for myself. If I don't get a hit there, I'm hitting the cage tomorrow early trying to figure out what's going on. And you get a hit like that, and now I don't even know if I need BP tomorrow. It's such a crazy game."

The Diamondbacks had been struggling. They lost back-to-back games against the Pittsburgh Pirates before the series against the Reds.

But with a strong ninth, Arizona will suddenly arrive in Philadelphia with some good vibes.

"It's all about results," Rojas said. "Results change your feels. When you get good results like this, even if it was late in the ninth inning, it completely changes the mood and how you feel going into the next game, next series."

Zac Gallen (4-1, 2.40 ERA) is scheduled to start for the Diamondbacks. Gallen, who suffered his first loss in the last outing against the Pirates, is 2-0 with a 0.00 ERA in two career starts against the Phillies. Gallen has pitched 10 scoreless innings, allowing only four hits and two unearned runs in those two outings.