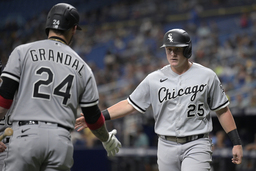 After two months of uninspired play, the Chicago White Sox seemed to find what they hope could be a spark by winning a series from an American League contender in the Tampa Bay Rays this past weekend.

"You see what our record is, but we've got guts, we like to compete and we're tough enough," White Sox manager Tony La Russa said. "We've got to execute better, no doubt about it, but the talent is there, and the toughness is there."

Still two games under .500, Chicago eagerly awaits this week's visit from the National League West-leading Los Angeles Dodgers. Tuesday marks the start of a three-game series between the White Sox and Dodgers, who each were playoff teams in 2021.

"Keep going and get to be a winning club," La Russa said. "It's a challenging homestand, but our pitchers are set up well for it. Let's have at it."

"We knew this weekend was a tough matchup," said Chicago's Jake Burger, who had two hits and two RBIs Sunday. "Taking two of three from Tampa Bay is a big thing."

The Dodgers welcomed an off day Monday, needing a buffer amid a grueling stretch that saw them play 31 games in 30 days.

Los Angeles is coming off a 2-5 homestand in which its two victories were bookended by three losses to scuffling Pittsburgh and two defeats at the hands of the NL East-leading New York Mets, who rallied to split a four-game set.

Still, Dodgers manager Dave Roberts lauded his team's resolve during the past month, as Los Angeles went 19-12, even while stumbling of late.

"It's just ending on a sour note, obviously, to lose two in a row at home," Roberts said. "But the body of work, 19-12, considering what we went through, is pretty positive."

The Dodgers will aim to rally behind right-hander Mitch White (1-1, 4.79 ERA). White has not faced the White Sox in his career but boasts success in interleague play, spreading 4 1/3 scoreless innings across three appearances.

White pitched a season-high five innings in his most recent outing, scattering three runs and four hits in an eventual 8-4 loss to Pittsburgh.

"I think this last week, we definitely could have played better, for sure," said the Dodgers' Trea Turner, who saw a 26-game hitting streak come to an end over the weekend. "I think we are capable of a lot, we expect a lot out of ourselves, but we know things are going to happen, we're gonna lose every once in a while and whatnot. But it's how we bounce back, how we keep our focus on what we're doing."

Right-hander Michael Kopech (1-2, 2.20 ERA) will get the call for Chicago. Kopech hasn't faced the Dodgers, but pitched four scoreless innings against the Chicago Cubs earlier this season in his only career interleague start.

Kopech has lost two of his past three starts, including Wednesday's outing at Toronto, when he allowed a season-high five runs and six hits -- including two home runs -- in three innings.