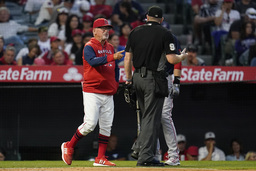 Garrett Whitlock will be on the mound for the Red Sox on Tuesday night when they take on the Los Angeles Angels in Anaheim, Calif., something that excites the Boston defense.

He also will have the advantage of facing an Angels team that is riding a 12-game losing streak, one defeat shy of the franchise's all-time worst skid.

Whitlock is embracing the idea of pitching to contact, relying on his defense and not relying so heavily on the strikeout. In his most recent start, on Wednesday against the Cincinnati Reds, Whitlock got a victory after throwing six innings, allowing just one run, which was unearned, while walking none and giving up five hits. He didn't record a strikeout.

"Amazing," Boston's Alex Verdugo said. "It feels like any time a guy is on first base, it's like, 'Hey, a double-play ball is coming up, right?' He's unbelievable throwing bowling balls up there. It's fun to watch. I'm out there in left field wondering if I'm going to get a ball."

It marked just the first time in 10 years and the third time in 24 years that a Red Sox pitcher threw at least six innings, gave up no earned runs and struck out none.

"It's rare," Red Sox pitching coach Dave Bush said. "In today's game, very rare. He was throwing a lot of strikes. It doesn't always look pretty with a lot of strikeouts nowadays. I like games like that, where he keeps the ball on the ground and gets double plays."

In a sharp contrast, when Whitlock faced the Angels on May 4, he struck out a season-high nine batters. The 25-year-old right-hander got a no-decision after allowing two runs in five innings in an eventual 10-5 Los Angeles win. That was Whitlock's only career start against the Angels. He also threw one scoreless inning of relief against them last year.

The Angels' bullpen has been a major issue during the losing streak, but recently the offense has been equally inept. Los Angeles was shut out Monday night 1-0 by the Red Sox and has scored two runs or fewer in six of its past seven games.

During the losing streak, the Angels have scored 35 total runs, averaging 2.9 runs per game.

"It's gut-wrenching at times, but you have to move on to the next day," Angels manager Joe Maddon said. "It's not easy, but you don't quit, and you go back and try to fix it."

About the only good news for the Angels moving forward is that Mike Trout's career-worst 0-for-26 slide ended Monday when he singled in the first inning. He wound up 1-for-2 with a walk and a strikeout against Michael Wacha, who fired a three-hit shutout.

"I still think he's trending in the right direction," Maddon said of Trout. "It's frustrating, that's a tough stretch, I don't know if he's ever done that before. He was out here at 12:30 (p.m. Monday) hitting, trying to get a better feel for it. He's so good, so talented, he's just got to stay with it."

Maddon added that injuries -- particularly to Taylor Ward and Anthony Rendon -- have contributed to the offense's decline.

"We're missing some guys that really make the lineup look different," Maddon said. "There's not as much protection, and we went through the same thing last year. We've got to figure out the right combination of things and work it out from there."

As of early Tuesday, the Angels had not yet announced a starting pitcher for Tuesday's game.

The only other time the Angels dropped 12 consecutive games in a season occurred over the final dozen contests in 1988. They then dropped their opener in 1989 before winning the next game.