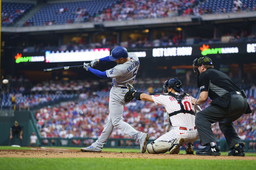 The Los Angeles Dodgers started their 10-day, 10-game road trip with an impressive 4-1 victory over the host Philadelphia Phillies on Friday.

The National League West leaders will attempt to stay hot as they look for their seventh straight win when they battle the Phillies again on Saturday.

Mitch White (1-0, 4.82 ERA) is expected to receive the start for Los Angeles. The third-year right-hander lost his lone career start against the Phillies when he gave up two runs in four innings on Aug. 12, 2021.

Even with Max Muncy getting a day off on Friday, the Dodgers had plenty of offense. Freddie Freeman contributed three hits, two RBIs and two runs, and Trea Turner had a hit and two walks to extend his hitting streak to 12 games.

After losing three straight to the Phillies to open a four-game series in Los Angeles last weekend, the Dodgers haven't lost since.

"We've got a good team," Freeman said on a postgame interview on SportsNet LA. "We're playing good baseball. You're going to go through a stretch where you lose a few games."

The Dodgers won on Friday with their only hits being seven singles and two doubles.

"Manufacturing runs when you don't hit home runs is key in this game," Freeman said.

The Los Angeles relief corps has sustained some injuries, most notably to Blake Treinen, Victor Gonzalez and Tommy Kahnle. Manager Dave Roberts said Friday that Kahnle won't resume throwing for weeks due to a forearm injury.

Kahnle had been expected to be a key part of the bullpen.

"But that's not to be. So other guys are just gonna get opportunities," Roberts said.

The Phillies will look to avoid a third consecutive loss and a fifth setback in six games on Saturday.

Following a promising 5-2 West Coast trip, the Phillies have scored only four runs total in the first four games of the current homestand.

The Phillies snapped a 21-inning scoreless drought when they managed a run in the ninth inning on Friday.

"I don't know what pressing is," Phillies manager Joe Girardi said of his struggling offense. "Every at-bat in the big leagues is a big at-bat."

J.T. Realmuto's double in the ninth inning prevented Philadelphia from taking consecutive shutout defeats. Kyle Schwarber had two doubles, but the offense as a whole scuffled once again.

"When you're struggling, sometimes you start searching instead of staying with the plan," Girardi said of the quality of at-bats.

"At the end of the day, it's about winning baseball games," Schwarber added.

It's unclear when Bryce Harper will return to the lineup while he recovers from a platelet-rich plasma injection in his right elbow on Sunday. The Phillies have gone 1-4 without the reigning National League Most Valuable Player.

"He's just not ready yet," Girardi said Friday of Harper, who has been relegated to designated hitter duty because of the elbow ailment.

Philadelphia will send Aaron Nola (1-4, 3.64 ERA) to the mound on Saturday. In his latest start, Sunday against the Dodgers, Nola allowed four hits and two runs in seven innings. He struck out eight and walked two in a no-decision.