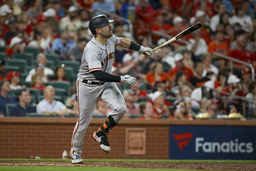 Right-hander Dakota Hudson will try to regain his command for the St. Louis Cardinals when they host the San Francisco Giants on Saturday in the middle game of a three-game series.

The Giants defeated the Cardinals 8-2 Friday to extend their winning streak to six games. St. Louis lost for the fifth time in six games.

In his previous start, also against San Francisco on Sunday, Hudson (2-2, 3.56 ERA) allowed three runs on five hits and four walks in 4 2/3 innings. He struck out four in a no-decision during a game the Giants won 4-3.

"We've seen what he's capable of when he pounds the zone," Cardinals manager Oliver Marmol said after that contest. "Can he get away from it as much as he's on the ground and getting double plays? Yeah, it works most of the time.

"That's the thing with sinkerballers. You'll have games where you're just behind every baseball and it's a clean 80 pitches, you're in the seventh and feeling great. There are going to be days where four or five of those get through and you're going, 'This isn't looking good.' "

It was the third time in six starts this year that Hudson failed to work at least five innings. He will try to refocus for the rematch.

"In a day when you don't have command, I think everyone has some way to figure a way back to the zone," Hudson said. "My usual way wasn't there. So, it was like, 'Let me find something else.' I threw everything. Just did my best to keep us where we were and have a chance to win."

Hudson is 2-0 with a 2.95 ERA in five career appearances against the Giants, including three starts. He will face an offense that has outscored opponents 49-20 during the winning streak.

"One of the strengths of our club last year, one of the best teams you could possibly imagine, was our bench was strong and deep and very dependable," Kapler said.

Jakob Junis (1-0, 1.20 ERA) will make his second start of the season for the Giants. In his Sunday start against the Cardinals, he allowed two runs -- on Juan Yepez's two-run homer -- on three hits and two walks in five innings. Junis fanned five.

The right-hander hasn't recorded a decision in five career appearances against St. Louis, including four starts. He has a 3.05 ERA in 20 2/3 innings vs. the Cardinals, and he is catching them in the midst of an offensive slump.

St. Louis has scored three runs or fewer in four of the past five games.

"We have to combat it," Marmol said. "They have some good arms coming. When we go to New York (to play the Mets), there will be good arms as well. These are the guys we're going to have to put some quality at-bats together against and change it around."