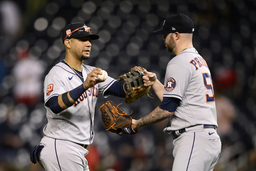 The math doesn't look good for the Washington Nationals going into Saturday night's game against the Houston Astros, who are the hottest team in the majors.

The Astros hold an 11-game winning streak. After beating Washington on Friday night, they've won four games on what's scheduled to be a nine-game road trip.

The Nationals have won four home games all season, dipping to 4-14 at Nationals Park.

It already has been a nice homecoming for Astros manager Dusty Baker, who's a former Washington skipper. With Friday night's 6-1 victory, the 72-year-old moved alone in 10th place in all-time managerial victories with 2,009 -- one more than Leo Durocher.

It was Baker's first game in Washington since he finished managing the Nationals following the 2017 season.

"I always wanted to leave a place in better shape than when I came," Baker said of his return. "... It's a little strange coming here (and to the visiting dugout), but I had great memories here. People were great. I enjoyed the town."

Nationals manager Dave Martinez replaced Baker in Washington. He's also a former player under Baker, so they have long ties and Martinez has seen Baker's work from various vantage points.

"Just the constant positivity," Martinez said. "That's Dusty. When things go down, he finds a way to lift you up. I learned a lot from him in that respect."

The Nationals might need a dose of that these days as they've struggled.

Houston ripped three home runs across the first three innings Friday night. The Nationals managed just eight singles one game after registering just two extra-base hits in a loss to the New York Mets, so there has been a power outage for Washington.

Astros slugger Yordan Alvarez has three homers in the past two games, including a massive blast to center field in the series opener.

Baker said second baseman Jose Altuve, who slipped awkwardly in the field, was taken out as a precaution. Altuve, who homered to begin the game, would probably have been given a day to rest Saturday anyway, Baker said.

The Houston pitching staff is in a good spot after Framber Valdez logged 7 2/3 innings and gave up one run.

"When we get starting pitching like that, then the bullpen stays relatively fresh and that's very important," Baker said.

The Astros will go with right-hander Cristian Javier (2-0, 0.83 ERA) on Saturday as Houston skips over Jake Odorizzi's spot in the order. Odorizzi got off to a slow 2022 season but has won three straight games, giving up one run in 17 2/3 innings.

Javier has never faced the Nationals.

Washington will counter with righty Erick Fedde (2-2, 3.90 ERA), who has allowed just one run across 12 innings in two starts this month. Fedde has never faced the Astros.

Fedde's problem has been efficiency, with his pitch count going above 90 four times this season. He has walked seven with seven strikeouts in the two May games.

The Astros are waiting to see the status of shortstop Jeremy Pena, who left Thursday's action because of a sore right knee.

"Hopefully he'll be available in this series," Baker said, "I'm not exactly sure when."