Home run-happy Yankees look for another win vs. White Sox 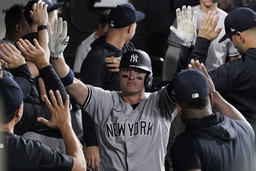 Aaron Hicks flied out to center field, DJ LeMahieu grounded out to third base and Aaron Judge struck out swinging.

So transpired the New York Yankees' sixth inning Friday night, the club's lone turn at-bat without a baserunner in the first two games of a four-game weekend road series against the Chicago White Sox.

After outscoring the White Sox 25-11 to open the set, the Yankees will aim to keep rolling on Saturday. New York has won 17 of its past 19 and 24 of 32 to begin the season.

"It's cumulative. It's up and down the lineup," Yankees third baseman Josh Donaldson said. "Lots of guys are having great at-bats, hitting a lot of balls hard right now. As a lineup, as a whole, we're tough to pitch to."

Giancarlo Stanton has hit three home runs in the first two games of the series and homered in three straight games overall. Aaron Judge and Donaldson, meanwhile, have connected in two straight games.

Leadoff hitter Tim Anderson doubled to lead off the game for Chicago, but the team was unable to score. At that point, Chicago already was chasing a pair of runs, as Stanton launched a two-run home run in the top of the inning.

Chicago hopes to receive a jolt from the likely return of Andrew Vaughn, who was activated from the injured list before Friday's game but didn't play. Vaughn was hit by a pitch on his right hand during an April 29 loss to the Los Angeles Angels and was placed on the injured list shortly thereafter.

Vaughn's abbreviated rehab assignment with Triple-A Charlotte included a two-homer game Thursday as he continues to work through a nagging bone bruise.

"When you're hurt, you're trying to get back as quick as possible, but you really can't rush things," Vaughn said. "So I took my time and got myself right."

White Sox manager Tony La Russa said Vaughn looked good in the batting cage, and the team anticipated having him for the final two games of the series.

Montgomery (0-1, 2.90 ERA) is coming off Sunday's no-decision against the Texas Rangers, when he scattered two runs on four hits in six innings with zero walks and five strikeouts. Control has been a strong suit for Montgomery thus far; he hasn't walked a batter in three straight starts and has issued just five free passes in 31 innings.

In three career starts against the White Sox, Montgomery is 2-0 with a 1.80 ERA and 23 strikeouts in 20 innings.

Keuchel (2-3, 6.86) stopped a three-start losing streak Sunday at Boston with six innings of two-run, eight-hit ball with one walk and five strikeouts. He is 4-4 with a 2.23 ERA in nine career starts against the Yankees.

The benches and bullpens slowly cleared in the bottom of the first inning Friday when Anderson took exception to the way Donaldson applied a tag at third base. Anderson shoved Donaldson after the play, but umpire Chris Guccione led the mitigation efforts as things returned to normal.