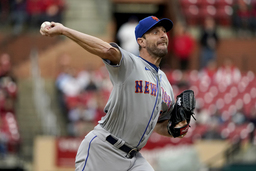 On Friday night, the Philadelphia Phillies became just the second team ever to be no-hit by the New York Mets.

A win on Saturday night gave the Phillies a chance to accomplish something no one's done this season: beat the Mets in a series.

The Phillies will look to hand the Mets that first series defeat Sunday night when they visit New York in the finale of a three-game set between the National League East rivals.

Kyle Schwarber's two-run homer in the seventh inning Saturday night provided the first runs of the series for the Phillies and sparked the visitors to a 4-1 win.

"We were all excited, man," Schwarber said. "We love runs."

Especially after Friday, when the Phillies fell 3-0 as they were no-hit by a quintet of Mets pitchers who combined to throw the second no-hitter in the history of the Mets, who played their first game in 1962.

On Saturday, the Phillies looked more like the team that ranks among baseball's top 10 in runs, batting average and on-base percentage. Philadelphia had just six hits but worked four walks and forced the Mets staff to throw 149 pitches.

"It was a fun, a good feeling, especially (since) we tied the series up," Schwarber said, "We've got a chance to go out there tomorrow and win the series. That's going to be the biggest thing."

The loss Saturday qualified as one of the few disappointments so far this season for the Mets, who are tied for the best record in the National League with the Milwaukee Brewers and have already set a franchise record by winning their first six series.

The Mets' patience was also on display Saturday when they drew eight walks and forced six Phillies pitchers to throw 180 pitches. But the one run scored was a season-low for New York, which stranded 13 runners and went 1-for-8 with runners in scoring position.

"It's tough to think you're going to win a game 1-0, especially against a team like that," Mets manager Buck Showalter said. "We didn't take advantage of the baserunners we had."

Eflin earned his first win of the season on Tuesday, when he allowed one run over six innings as the Phillies cruised to a 10-3 win over the Colorado Rockies.

Scherzer didn't factor into the decision last Monday night, when he allowed just two hits and struck out 10 over seven scoreless innings in the Mets' 5-2 win over the St. Louis Cardinals. It was the 106th time Scherzer has struck out at least 10 batters in a game, the fifth-most in the modern era.