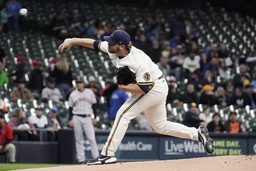 Like his Milwaukee Brewer teammates, Corbin Burnes has looked sharp following a rough opening against the Chicago Cubs in 2022.

Meanwhile, Marcus Stroman is still trying to find his form for Chicago.

Aiming for their sixth straight win, the Brewers will look to sweep a three-game home set from the struggling Cubs on Sunday. On the mound, Burnes (1-0, 1.75 ERA) will face Stroman (0-3, 6.98) in a matchup of right-handers.

Since losing the season's first two games at Chicago, Milwaukee is 15-5. The Brewers have outscored their opponents 38-13 during this five-game winning streak, including 20-2 in the first two games of this series.

"The thing about baseball is you have to keep grinding, keep putting in the work and keep trying to get better," Brewers star Christian Yelich, who has homered in each of the past two games and is 6-for-13 in the past four, told the club's official website.

Burnes, the reigning National League Cy Young Award winner, certainly has pitched better since a 5-4 loss to the Cubs on Opening Day, when he gave up three runs, four hits and three walks while striking out four over five innings. In his following three starts, Burnes has allowed two solo home runs and seven other hits, and has struck out 29 and walked three over 20 2/3 innings.

He recorded 11 of those strikeouts while yielding just two hits over 6 2/3 scoreless frames during the Brewers' 4-2 home loss to the San Francisco Giants on Monday.

"I'm just going out and doing my job," Burnes told the website. "We've done really good to this point with everyone sticking to what they do best, and going out there to play good baseball."

Meanwhile, the Cubs, losers of three straight and nine of 11 since starting 6-4, have not played very good baseball behind Stroman to start his career on Chicago's North Side. His teammates have totaled just 10 runs in four games when he's been on the mound.

Then again, Stroman hasn't necessarily helped his own cause; he's yielded 15 earned runs over 19 1/3 innings. However, he lasted a season-high six innings, giving up two earned runs and six hits without a walk during Tuesday's 3-1 loss at Atlanta.

"It's getting better," Stroman told the Cubs' website. "I'm still not where I want to be, but definitely making strides in the right direction. As far as how I feel, I definitely need to do some work."

Stroman made a solid first impression with the Cubs when he gave up a home run to Willy Adames and allowed one other hit, while walking three with three strikeouts, over five innings of Opening Day appearance over Burnes and the Brewers. Adames is 5-for-8 with two homers vs. Stroman all time, and he is batting .341 with four doubles, four homers, 11 runs scored and 11 RBIs during a 10-game hitting streak against the Cubs.

Milwaukee's Hunter Renfroe is 5-for-9 with three home runs and five RBIs in this series.

Chicago's Ian Happ is batting .333 while hitting safely in six of his past seven games and is 5-for-14 with two doubles and a homer vs. Burnes. Teammate Jason Heyward is 4-for-9 with a homer against him.

However, the Cubs have been held to one run in three straight games, and four of their past five.