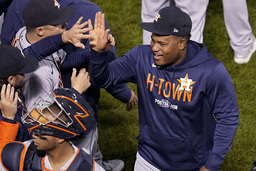 Boston Red Sox manager Alex Cora is aware of all the cliches heading into Friday's Game 6 of the American League Championship Series against the host Houston Astros.

The Red Sox, after all, are facing a 3-2 deficit in the best-of-seven series after sustaining back-to-back losses at Fenway Park in Boston. The Astros have totaled 18 runs on 23 hits over the last two games, while the Red Sox have mustered just three and eight, respectively.

Despite the lopsided totals, Cora is focused on having his team even the series to set up a winner-take-all Game 7 on Saturday.

Eovaldi, 31, already has faced the Astros on two occasions this series.

He allowed three runs on five hits in 5 1/3 innings in a 9-5 win in Game 2 on Saturday before the bottom fell out in a disastrous ninth inning in Game 4 on Tuesday. Eovaldi didn't get the benefit of a potential third-strike call and surrendered four runs on two hits in two-thirds of an inning.

Despite little room for error, Eovaldi insisted on Thursday that he's ready for the challenge.

"I'm extremely confident," Eovaldi said. "Everybody is a little frustrated with the way we've been playing lately. We know it's not the way we are capable of playing, and we know where we're at in the standings, and everything that's on the line for this game. It's do or die. You either win or you go home. Nobody is ready to go home right now, and we're going to be ready to go tomorrow."

Kevin Plawecki will draw into the lineup and be behind the plate to catch Eovaldi, Cora said.

Garcia will take the mound on Friday after exiting his previous start with discomfort in his right knee. Prior to his departure in the second inning, he surrendered a grand slam in the first.

Astros manager Dusty Baker expressed confidence that Garcia is ready to go as the team bids to advance to the World Series for the third time in five years.

"I mean, all I can do is go on his word, go on the trainer's word, and go on (Astros pitching coach Brent Strom's) word," Baker said. "They said that he didn't feel anything. Now, by that I mean -- like, I try to tell our guys to come clean with me 100 percent. Most athletes, they're going to say I'm doing good even when they're not, but you can usually sense, see a wince on one of their faces after a pitch or whatever.

"I just hope whatever adjustment that they made that he is not thinking through the act of pitching while he is making his adjustment. Things have to be so natural that you're not thinking about it."

Garcia told reporters Thursday that his knee feels "like normal."

Baker also said rookie center fielder Jake Meyers likely won't return to the lineup in this series, although he's available to either pinch-run or pinch-hit. Meyers injured his shoulder in the final game of the AL Division Series against the Chicago White Sox.