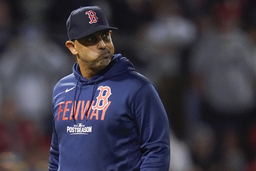 Alex Cora serves as the all-too-convenient tie that binds the Boston Red Sox and Houston Astros as the teams head into Game 1 of the American League Championship Series on Friday in Houston.

Cora, after all, was the Astros' bench coach for their World Series title-winning team in 2017 and the Red Sox' manager during their championship-winning season the following year. His involvement in the cheating scandal has been rehashed ad nauseam, and to his credit, he hasn't shied away from it.

OK, can we move on? Because there is much more to discuss entering this best-of-seven series.

Sale, 32, was shelled last Friday, allowing five runs on four hits in one inning of a no-decision against Tampa Bay. Boston responded by winning that contest on its way to dispatching the Rays in four games during the AL Division Series.

Despite Sale's struggles, Cora expressed confidence in the hurler heading into the series opener.

"Everybody has to be part of this. We feel comfortable with Chris, with the rest he got," Cora said of Sale, who posted a 5-1 record with a 3.16 ERA in nine starts this season.

Sale missed both series in June versus Houston as he worked his way back from Tommy John surgery. He is 5-3 with a 2.20 ERA in nine career starts against the Astros.

Speaking of extra rest, Red Sox outfielder and DH J.D. Martinez admitted Thursday the swelling in his ankle has "gone down a lot." The slugger went 7-for-15 with one homer and four RBIs in three games against Tampa Bay in the ALDS.

The Astros, who won five of the seven meetings against the Red Sox in June, will be making their fifth straight ALCS appearance.

Valdez, 27, struggled in his lone postseason action last week after posting an 11-6 record with a 3.14 ERA in 22 starts during the regular season. He allowed four runs on seven hits in 4 1/3 innings of a no-decision against the Chicago White Sox on Friday.

Valdez owns a 2-1 record with a 1.59 ERA in four career appearances (two starts) against the Red Sox. He has permitted two runs and struck out 18 batters in 14 1/3 innings en route to posting a 2-0 with a 1.26 ERA in two starts versus Boston this season.

Luis Garcia will start Game 2 for the Astros. As for Game 3, well, there's a bit of mystery there with right-hander Lance McCullers Jr. nursing forearm tightness in his pitching arm and removed from the ALCS roster.

Right-hander Jake Odorizzi was added to the roster in place of McCullers. Odorizzi was left off Houston's ALDS roster against the White Sox.

Astros outfielder Jake Meyers participated in practice Thursday for the first time since injuring his shoulder while attempting to make a leaping catch in Game 4 versus the White Sox.

Manager Dusty Baker, however, told reporters that he hadn't made a decision on Meyers' involvement for the upcoming series.