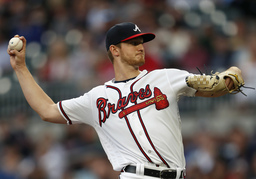 The 2019 season began for the New York Mets like so many other seasons over the past quarter-century -- chasing the defending National League East champion Atlanta Braves.

The season is barely halfway complete, but it's become obvious 2019 will also end for the Mets like so many of those other seasons: gazing upward at the far-off-in-the-distance Braves.

The Mets will look to at least momentarily stop their freefall Friday night, when they host the first-place Braves in the opener of a three-game series. Defending NL Cy Young Award winner Jacob deGrom (4-6, 3.25 ERA) is scheduled to take the mound for New York against Rookie of the Year candidate Mike Soroka (8-1, 2.07 ERA) in a battle of right-handers.

Both teams suffered losses Thursday afternoon. The Mets were in position to end a four-game losing streak after scoring three runs in the top of the ninth, but closer Edwin Diaz gave up five runs in the bottom half of the inning as the host Philadelphia Phillies earned a 6-3 victory. The visiting Braves settled for a split of a four-game series with the Chicago Cubs after they fell, 9-7.

The loss to Philadelphia ended a disastrous 11-game road trip for New York in which it went 3-8 and blew multi-run leads in each of its last five losses. It is the first time a team has lost five straight games in which it led by at least two runs since 2011, when the Mets did it from April 10-14.

"They're all tough in the moment," manager Mickey Callaway said after the Mets fell to 37-45, the third-worst mark in the NL ahead of only the San Francisco Giants and Miami Marlins. "This one stings the worst because it just happened. This is a game that we all felt we really needed to win. Again, we put ourselves in a position to do that and we didn't get it done."

The Braves, on the other hand, appear to be rounding into form even despite Thursday's loss. Atlanta has the best record in baseball (18-7) this month and is 4 1/2 games ahead of the Phillies in the division.

"It's a complete team," left-hander Dallas Keuchel, who earned a World Series ring with the Houston Astros in 2017, told reporters after recording his first win with the Braves on Wednesday night. "I know a thing or two about complete teams. This group really excites me, day in and day out."

Neither deGrom nor Soroka factored into the decision in their most recent starts Sunday. DeGrom allowed two runs over six innings as the Mets fell to the Cubs, 5-3. Soroka tossed two scoreless innings in the Braves' 4-3, 10-inning win over the Washington Nationals before exiting after he was hit on the right forearm by a pitch while batting against Austin Voth.